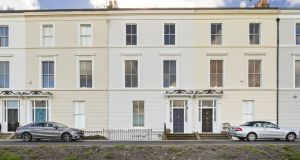 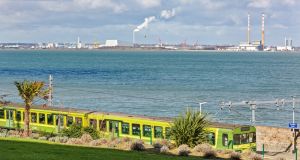 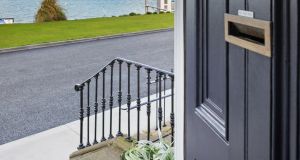 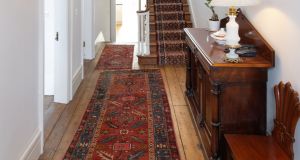 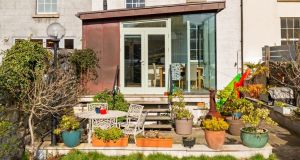 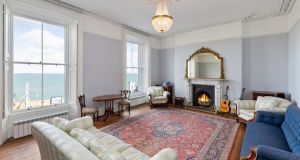 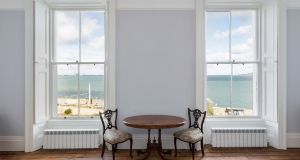 This article is 4 months old

The seafront at Seapoint is one of the capital’s great coastal public paths. You can survey the swathes of day trippers dipping their toe in the water from the viewing platform at the base of the Martello Tower or pick out the seasoned swimmers, often often dressed in little more in a fluffy bathrobe as the return to their homes after a restorative bathe.

But this part of Blackrock/Monkstown also boasts some seriously salubrious private property. Ardenza Terrace, the entrance to which is beside that of  Seapoint Dart station, is one of a select number of addresses where residents can enjoy 180 degree views of Dublin Bay extending from the Baily on Howth Head all the way south to Dalkey Island.

Number 4 is one of eight, three-storey over basement, homes that offers stellar views to anyone with deep pockets and a love of the sea a place.

The four to five-bedroom property, built in the 1852, has a shared lawn to the front where there is a private footbridge that takes you across the Dart line to the seashore. Communal lobster pots stacked on the bridge are for residents to use, sharing any catch of the day with the neighbours. At high tide residents can swim at their own private rock pool. And after a bracing dip you can warm yourself up the sauna, to the rear of its basement level.

The house is ideal for a seafaring family. There are kayaks and a dingy “parked” in the back garden and a 31sq m garage at the end of the garden that is big enough to fit a boat and a couple of cars.

It also has vehicular access off Seapoint Avenue, where traffic levels have dropped off significantly with the introduction of a one-way system and the installation of two cycle lanes.

The reception rooms at hall level have bi-fold, interconnecting doors that lead from the living room to a formal dining room. The front room window frames one of Dublin’s best views while a wood-burning stove has been set into its grey marble fireplace, Scandi-style.

The kitchen is on the return and has a copper clad extension. The design by Fionnuala O’Connor of Urban Architecture includes floor to ceiling glass walls that overlook a gorgeous garden that is saturated in south-facing sun. There are fruit trees including plum, fig and apple.

On the first floor the drawing room extends the width of the house its pair of windows capturing the panoramic vista, which is especially alluring at sunset. There is a bedroom to its rear with a bathroom on the return. On the second floor there are two more bedrooms, both of which have en suite shower rooms. The master is set to the front.

At basement level there are two fine rooms that could be used as a consultancy rooms or as further accommodation. On its return is a large utility, shower room, hot press and aforementioned sauna. The property, which is a protected structure, extends to 350 sq m (3772 sq ft) is asking €2.75 million through agents Quillsen.

‘I am 29 and have social anxiety. I have blown my chance at life’