Online and phone bidding have taken the fun out of the saleroom, says veteran auctioneer 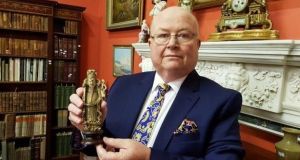 George Mealy on his years in the auctioneering business: “It has been a passion – an absolute passion. There was something new every day. I’ve loved every minute of it.”

Dramatic announcements from Mealy’s Fine Art in Castlecomer are nothing new – the Co Kilkenny auction house is well known for unearthing and selling unusual and quirky antique objects.

Even by Mealy’s own standards, however, the notice which appeared on the company’s website in recent days was extraordinary.

“To my loyal friends, customers and supporters,” it begins. “I am writing to you to announce that after 45 years in business, I have made the decision to retire from auctioneering. . .”

The man who signed this uncommonly forthright declaration is a bit of a legend in the Irish antiques and collecting world. Having conducted many of the most prestigious country-house sales here in recent decades, George Mealy is widely regarded as one of the most successful and astute practitioners in the trade.

It’s an impression which is reinforced by the glittering glass facade of Mealy’s purpose-built premises just outside Castlecomer, Co Kilkenny, and the comfortable office inside, furnished in the style of a country-house library and packed with the paraphernalia of nearly half a century of auctioneering activity: books, paintings, documents, boxes, bits and pieces of all shapes and sizes.

Given so many years of operations, was it hard to put up that notice – with its distinct “end of an era” tone – on the website?

“It wasn’t really,” he says. “I always wanted to retire early. And I’ll continue with valuations, and probably put up an online site as well.”

What about the actual auctioneering, though, the patter, the excitement as the hammer falls, won’t he miss that?

“No,” he says.  “In the last couple of years the whole fun went out of it.  With the online bidding and the telephone bidding, you don’t get people on the chairs. It’s a lonely place, the rostrum, if there’s nobody in the room.”

As a young man George Mealy joined his elder brother, Fonsie, in a family auctioneering business which had been set up by their father in 1934.  Ten years ago they went their separate business ways, and Fonsie Mealy’s Chatsworth auction room on the other side of Castlecomer is now managed by Fonsie’s son, George Fonsie.

“Rumours went around that we weren’t talking but that was a lie,” George Mealy says.  “We’re the best of friends still.”

He adds that a serious illness in his immediate family, added to the fact that his sons David and George Gerard “have no interest in getting up on the rostrum”, played into his decision to make this major change in direction.  As, of course, did the changes which have taken place in the antiques business in recent years.

When George Mealy went into the business it was a very different story. “Oh,” he says, his face lighting up at the memory. “You had the doors bulging with people. You had all the dealers coming to every auction. You’d be lucky now if you had one dealer in the house, because they’re back in their offices bidding online as well. People don’t even view now. It’s all condition reports and photographs – and that’s all over the world.”

As for the highlight of his 40-plus years as an auctioneer, that’s easy.

“The Mount Congreve sales in 2012,” he says, indicating the painting of the aristocratic Co Waterford country house and its last inhabitant, Ambrose Congreve, on the wall behind his head.

“Myself and Fonsie did that between us, in association with Christies of London. We had been going down to Mr Congreve for nearly 25 years, and it was a most wonderful house with most wonderful pieces in it.’

In particular, he recalls a mahogany cabinet with the monogram of Marie Antoinette, which made €40,000 before the sale even started. At Christies in London, a single silver table centrepiece sold for €140,000. In Waterford they got €90,000 for a Carlton House desk.

In 2016, Mealy’s conducted a sale at Lotabeg House in Co Cork which raised more than €850,000. Three decades earlier, they conducted  a sale at Dunbrody Park for Lord and Lady Donegal.

In 2006, at the height of the boom, a contents sale at Luggala, home of the Guinness heir Garech Browne, brought the sort of prices auctioneers nowadays can only dream about.

George Mealy isn’t nostalgic for the Celtic Tiger as such. What saddens him, though, is the way in which antique pieces – especially the much-maligned “brown furniture” – languish, unappreciated and unloved, in store-rooms the length and breadth of Ireland.

“Dining tables and chairs, wardrobes, display cabinets, things that used to sell like wildfire – even the likes of that bookcase,” he says, indicating the mahogany piece behind him. “Ten years ago, a couple of thousand euro. Today, 500. And the craftsmanship that is in them. It’s a shame.”

“It won’t be up and running for a couple of months, but we will still have the quirky, unusual things.”

Meanwhile, he has to persuade the owners of thousands of unsold objects to come and collect them from his premises. The lights will go out in Mealy’s premises in Castlecomer Business Park on Friday August 3rd, at which time items not collected will, as the website notice clearly states, “be disposed of”.

How would George Mealy himself sum up his time in the antiques business?  He beams.

“It has been a passion – an absolute passion,” he says. “There was something new every day. I’ve loved every minute of it.”

As I head back out into the sunshine, he calls something from behind me.  I turn. “Watch this space,” he says. He’s still smiling. That’s something, at least.