Where the heart is: why Tramore is my special place 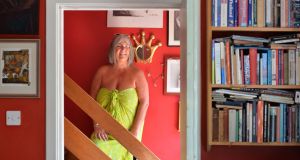 A sense of being loved in the community she grew up in brought artist Ger Kennedy back to her native Tramore after years abroad. Photograph: Alan Betson/The Irish Times

In 1960s Ireland, the telephone was an elusive luxury, so to get the update on her gravely ill baby daughter, Kathleen Kennedy had to go to the top of Patrick Street, a steep road that runs through the centre of Tramore. She was going to the doctor’s house for the latest news from the Dublin hospital, where baby Geraldine was receiving care. She had been told the previous day that her daughter “was dying”.

The neighbours, who lined the street as Kathleen made her way up that hill, stood at their doors and on the footpath and watched in silence. They knew the nature of the call Kathleen’s doctor was going to make. They knew of the hope and dread Kathleen was carrying in equal measure. They knew that this woman, their friend and neighbour, had lost seven babies before Geraldine – five through miscarriage, three full term who had died shortly after birth.

When the usually demure Kathleen came whooping and hollering down the hill a few minutes later, shouting the good news that her child would live. The neighbours joined in her joyful weeping and broke into spontaneous applause as Kathleen made her way home.

Ger (baby Geraldine) Kennedy was 13 years old when she was told that story. It made sense to her. She had always felt very loved in her native Tramore.

“When I was born the whole town was rejoicing,” she says. “So my attachment to Tramore is historical and very emotional. I wear this town like I wear my skin. I feel like Tramore runs in my veins and I’m a part of the fabric of the town and it’s part of the fabric of me. When I walk around this place and look about, I can say I know this wall, or I know this road, I remember those cracks in the pavement.”

It was that sense of being a beloved part of a community that brought Ger home, along with her five children, from their beautiful 16th century merchant’s house in the historical part of Norwich city. She’d spent many years there, but the draw from home was strong.

She settled in Elm Park, in a house which she rented for the first couple of years.

“It became the house that I really, really wanted to buy, for no obvious reason. It’s so bog standard and unimpressive, but having rented it for a couple of years we knew how lovely the neighbours were and how great the garden was.”

There was nothing lovely about the house when they first moved in.

“ There was patchwork wallpaper and a hole in the sitting room carpet where the previous tenants used to chop wood. When we took down the net curtains on the sitting room windows, it became clear that somebody at some point had decided to redecorate, but instead of taking the curtains down they simply ran a paintbrush around the wave of the curtains.”

Ger got to work. As an artist, she had strong ideas about colour and decor. But she was determined to make this a home.

“I had a vision for it. I knew it could be a beautiful. It just became a place that was very liveable in, very fast. I embraced the smallness of the rooms with colours that wrapped themselves around me and anyone who visits.

“I have five children and their various partners and 16 grandchildren. Most of my five children live in the area. I’m near their homes and the grandchildren’s schools, so this is a very social house. It can get a bit hectic at times, which all sounds lovely in theory, but sometimes it’s chaos here. We cope by spreading ourselves all over the house.”

Ger’s favourite places in the home are her sitting room and the garden.

“My sitting room is just cosy, which I love. It’s red. I love summer, but my sitting room in the winter is really lovely. The fire is lit and the room glows red.”

“I love the garden too. Sun’s really important to me. It fills the garden for the whole day and I like to sit out there in my sarong. I have about 40 different wraps which I wear around the house all year around.”

Ger lives in the house with her partner Ciarán and their blind cat, Edward.

“This is a very comfortable house, a place to flop in. There’s nothing precious in our house, nothing you can’t touch. I think this is our forever home.”