Seagull poo and the hosepipe ban make for the perfect storm

Whatever about cleaning seagull poo off your driveway without a hosepipe, not even a water cannon will get it off your car 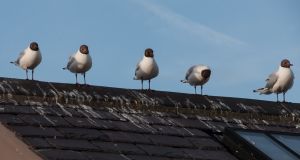 “You’re basically talking about birds the size of a cat, which if you think about it (five or six cats perched on the roof of your house defecating morning noon and night), would be a concern.” Photograph: Getty Images

Ah, seagulls. Loved by all, friend to many, a joy to behold! Oh, no wait, that’s robins. Seagulls, on the other hand, are currently loved by no one, have major public-relation issues and are not a joy to behold – especially if you are on the pier in Howth on a sunny day with a box of fish and chips in your hand or even visible in your mouth.

Yes, food in your mouth is now fair game as far as seagulls are concerned. It’s nothing personal. Seagulls are used to fighting other gulls for their food. They just see the food in your mouth as being in the jaws of another seagull, albeit a much larger, stupid seagull without a beak or claws or anything really that looks like it might be of any use as self-defence. In fact, they have learned that these large flightless gulls are more likely to drop their food and run away the more they harass them. Result!

Howth has found itself overrun with partying gulls determined to paint the town, em, white

But before you go loading up your AK-47, just remember it’s a sin to kill a seagull, no wait, wrong again, that’s mockingbirds. I’m unsure if it’s a sin to kill a seagull (better check with the PP) but it is definitely illegal. They are protected by the 1976 Wildlife Act and an EU Birds Directive and boy do they know it. You can just tell by the way they are throwing their weight around, acting like they own the place. Everything from dive-bombing children in their own back gardens to late-night city-centre rampages which end in their ‘hilarious’ early morning prank calls on the windows of city-centre apartment dwellers. What complete jerks.

Branded as lawless and having “lost the run of themselves” by no less than the Seanad, seagulls are clearly drunk on power (or actually just drunk), whichever. They are in control and they know it.

With this in mind, spare a thought for the residents of Howth, a bustling harbour village in north Co Dublin and popular tourist destination, which is pretty much seagull HQ (technically their head office is the off-shore island of Lambay, the largest seabird colony in Ireland, but for seagulls it’s mainly just used for tax purposes and breeding – they prefer to do their socialising in Howth, which is all round much better craic than Lambay). As a result of the continued good weather, Howth, which normally features in the property pages for its “stunning maritime setting”, has found itself overrun with partying gulls determined to paint the town, em white.

The gulls, of course, look like butter wouldn’t melt

Caught in a perfect storm of a countrywide hosepipe ban and industrial quantities of seagull poo (they don’t mention that in the real-estate brochure) residents are facing an uphill struggle to keep their homes and cars clean. “Have you any idea just how big these things are?” asked one exasperated resident from his roof, referring to the actual size of seagulls. He is talking about the herring gulls, which are the big ones commonly seen living it up in bars and bins around Dublin. Up close, it can be quite a shock to observe just how enormous they are. Some of them don’t even look real, so unnaturally white and huge they appear. You’re basically talking about birds the size of a cat, which if you think about it (five or six cats perched on the roof of your house defecating morning noon and night), would be a concern.

The gulls, of course, look like butter wouldn’t melt, what with their pristine white and light-grey plumage and yellow-orange beaks, but don’t be fooled, seagull poo is very acidic by nature. It can literally eat through building materials if left to accumulate, not to mention the smell as it cooks in the sun (it’s all the chips and ill-advised late night kebabs from their boozy city centre blow-outs; Howth is grand but sometimes you just want, I don’t know, a change of scenery?) By the time they get back to the burbs, it’s anyone’s guess what’s coming out the other end.

Whatever about the logistics of trying to clean seagull poop off your roof or driveway without the aid of a hosepipe, not even a water cannon will help when it comes to dried in poo on your car. Bird poop on cars in general is not good because of the high acidity levels (particularly bad from seagulls on the lash). The acidity will strip the paintwork right off unless removed immediately. The problem is even more acute in hot weather as, believe it or not, heat causes the lacquer on cars to expand which means bird droppings literally get sealed in as the lacquer contracts around it when cooling down, making it nigh on impossible to wash off without damaging the paintwork. A survey proved red cars get the most hits. White would be a better choice, less visible.

Seagulls meanwhile, seemingly unaware of the mounting PR disasters and torrent of negative press, continue to give two feathers to the public and their property. “We have EU protection,” they crow from a roof-top while eating your chips. Well guess what gulls, so do we. So do we.

Period homes in a tech neighbourhood: two to rescue on Pearse Square from €600k
6

The old country: Get ready for an ageing Ireland
Real news has value SUBSCRIBE