Ballyconneely auction of art, furniture, silver and handbags designed to attract buyers on a break 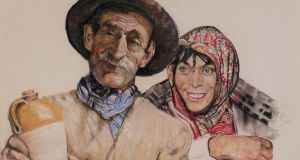 Ireland’s Atlantic coast has been a magnet for generations of painters, from Paul Henry to Donald Teskey, Jack B Yeats to Gerard Dillon. At this time of year, and especially over the August bank holiday weekend, it is also a magnet for tourists – which is why Niall Dolan has scheduled eight days of viewing ahead of his summer sale in Ballyconneely, Co Galway next week.

“People pass through Connemara every day, and they’re here on holiday for a week, or even a month, and they’re not looking at their watches,” he says. “So they can take their time and have a good look.” His marquee is, he adds, “smack in the middle of the village. You cannot miss it.”

Dolan has assembled a world of objects for the sale. Inuit art from northern Canada, rugs from Persia, Japanese netsuke: there’s surely something among the 500-plus lots to draw the most discerning buyer to this tiny township on the shores of the Wild Atlantic Way.

A Victorian pine writing desk hails from Stokesay Court in Shropshire – better known to many of us as the family home where Keira Knightley springs from the fountain in the film version of Ian McEwan’s Atonement (lot 105, €2,400-€2,800). Two paintings have come from the private collection of the painter Mark O’Neill; Robert Ryan’s High as Heaven, Deep As . . . and Soren Melchior Hanson’s Evening Sunlight, (lots 115 and 116, €800-€1,200 each).

“They all come with their weights, pendulums, keys and all the rest,” Dolan says. “Like a piano, a clock needs to be tuned when it’s put into place – but moving them is not as difficult as it might appear. They come apart and go back together, and it’s lovely when you go inside a clock and you see the workmanship from 150 or 200 years ago, more or less untouched.”

Paintings, needless to say, form the backbone of the sale – especially paintings of our Atlantic coast, which have become something of a speciality for Niall Dolan Art.  There are landscapes and seascapes by Arthur K Maderson, George Gillespie, Maurice MacGonigal, Douglas Alexander, Cecil Maguire, Charles Vincent Lamb and Markey Robinson as well as younger contemporary painters such as Henry Morgan and Carina Scott.

“I think pictures of Connemara mean something more when you’re actually there in the middle of it – and Connemara draws the pictures to us, in a way,” says Dolan.

Peter Murtagh in the Americas: 'I’ve left behind something that’s going to get an awful worse'
3