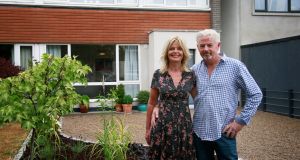 The Houlihans at their renovated house at Lakelands, Stillorgan. Photograph Nick Bradshaw

If you met husband and wife duo, Kevin Houlihan and his Swedish wife Kathrin, at a dinner party you wouldn’t necessarily have them pegged as property developers. They don’t fit the mould – she’s cooly clothed in a way that looks effortless and as well as being a builder, he is an inventor and artist on the side.

Having successfully renovated their Stillorgan home, a 1950s semi that they, over the course of 10 years, doubled in size to accommodate their family, they decided earlier this year to put the house on the market as their kids have all flown the coop. It was sale agreed within 10 days for well over its €950,000 asking price.

It wasn’t their first successful sale. While raising their family they had carried out a couple of other doer-upper projects to sell, becoming one of a new breed of small-time developers.

The couple spend their spare time trawling the suburbs to find other properties with similar scale and upgradeable potential. The suburbs get a bad rap in popular culture but, in reality, they can offer a sense of village living and the prospect of a more spacious home.

The homes the Houlihans like to upgrade were built in the 1960s, between 50 and 60 years old and are now also a part of our heritage, according to Charles Duggan, heritage officer with Dublin City Council, in the same way our Georgian, Victorian, Edwardian and Modernist housing stock has become.

For the most part, suburban homes were built for baby boomers and what they lack in period features they make up for in terms of scale, Duggan continues. “It’s a scale you don’t get now in modern constructions. They also tend to have large gardens and this makes them highly desirable.”

The Houlihans’ latest property, 21 Lakelands Crescent, was a BER G-rated 1960s semi when they came across it online.

But it had a sense of space that modern properties do not have, Kevin Houlihan explains. “It was also on a large plot with windows that extend the width of each room washing the interior with light.”

What it did not have was a proper sense of flow. Originally the property had a garage to the front. This had been converted into a family room. It had a small hall and its timber open tread staircase was situated in the front room.

The couple moved the front door to the right to give them the space to install a decent size hall, removed the staircase from the living room, relocated it to the new hall and changed the look of the balustrade to a timber baton that is mid-century in style.

Duggan argues that this feature would have given the house its distinction. “As this style of house gets older, it takes on the charm of its time. You can reflect on the period in which it was built when the culture of suburbia was relatively new.” Kevin Houlihan counters that it was noisy to walk on and leached heat from the living room.

The hall has been panelled and a decent-size guest wc installed to the right of the front door.

The original single door to the living room was replaced by a set of double doors fitted with parliament hinges, so that they fold right back flush against the wall, giving a far greater sense of space to the entrance. They kept the raised hearth, very much a child of the 1960s, and had it tiled in a stone-like fire-retardant tile. Kathrin is in charge of the décor and it is little additions like the zebra-skin rug in the pale grey living room that helps add personality to the refurb.

They also kept the double doors leading from the living room to the formal dining room, also fitting these with parliament hinges.

Before, the kitchen had been a pokey space with room for a small table, recalls Kevin Houlihan. He knocked the dividing wall between it and the dining room to create a modern space the width of the house that had room for a decent dining table as well as a long stone-topped island which you could use as a breakfast bar.

There wasn’t space to add a proper size utility room so instead the couple made use of what the Houlihans describe as “dead volume” within the house to install a laundry chute.

They did this by repurposing the hot press cupboard on the landing where the original hot water tank had been housed. This has become the drop point for dirty garments, these land in a basket set at chest level atop a shelf on the way into the kitchen.

Directly across from the laundry chute is a double-door cupboard, big enough to fit a washer and drier stacked atop of each other and to also accommodate a neat clothes horse, and keeping drying laundry out of sight.

Part of the same void is put to use in the living room where it will be used to house a TV cable box or games console. These can be hidden from view by adding a front flap.

The other major change made to the house was a serious insulation upgrade. It was built using the single block construction method favoured at that time and its lack of insulation gave it a lousy BER-G rating, Kevin Houlihan says. By adding insulating board throughout the interior and 80ml of insulation to the exterior walls, it is now a B3-rated home. New double-glazed windows throughout also helped.

The house has a pedestrian side access and on the side garden the couple has built a second, detached property.

Number 21 hasn’t been extended so the next owner can still expand its footprint. A granite patio to the rear gives you some sense of how far out you could go and still stay under the planning regulations. The garden is west-facing in orientation and has a lovely mature Cordyline palm tree.

Upstairs the house retains its original layout of four bedrooms; two large doubles and two singles. By hiving off some space from the two adjoining doubles, they were able to install a shower en suite into the master bedroom. They also added a ladder to the attic and floored it should the next owner wish to extend upwards. It would give them a further 24 metres of space.

Save for a layer of Tyroline, a contemporary form of dash render applied to the front of the property, the exterior looks pretty much the same as it did when the couple bought it with its original concrete tile detailing extant.

Roof with a view at bijou canal cottage for €350k