Diamond Digs: older apartments worth more than a second glance 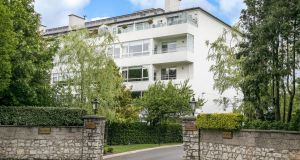 The word “apartment” is the fourth most searched for word on property website MyHome.ie, and with a clear shortage of new stock coming to the market, second-hand apartment schemes can sometimes offer better locations and roomier living spaces than new-builds. They also tend to be lower density and set in mature grounds. They often come with a separate kitchen and livingroom, which can be an advantage if trying to rear a family because it gives everyone a discrete space.

Obviously they have their drawbacks too. A feature of older blocks can be old windows and flat felt roofs that will need upgrading. If these works haven’t been done in recent times then you may get a sizeable bill to pay towards their upgrade in the coming few years. Before you buy, it’s worth finding out what money is in the management company sinking fund and when it was set up.

If the unit has an open fire, ensure that you can use it. In some blocks you can, as long as you pay for a chimney sweep to clean it annually; in others the open fire may no longer be allowed for use with solid fuel. In some instances you may be able to install a gas fire instead, but this will be subject to management rules and to a survey by a reputable installer.

Many older blocks also have electric storage heating, which is costlier to run than gas. House-hunting at this time of year doesn’t give a real sense of cold or damp that might lurk, so be sure to check the Ber certificate. Similarly, if you see bare breeze-block walls don’t be surprised to hear that the building has very little insulation. Upgrades of this kind are more expensive to execute in an apartment than a house because a crane is often required to hoist up the necessary materials. The same applies to the installation of new windows.

In some older units the water tank is on the roof. In others it is in the property itself, which may lead to lower water pressure – get your surveyor to check that out.

Downtraders with future-proofing in mind should check whether the lift is big enough to accommodate a wheelchair. Check the width of internal door frames too – don’t take the agent’s word for it.

Here are five to consider:

Large 1970s-built complex comprises three interconnecting blocks. Number 15 is on the second floor and the single aspect 88sq m (947sq ft) property has been reconfigured to open directly into the kitchen with the dining area located to the right. Originally the apartment opened into a hall, with dining and kitchen off it.

Double doors lead from the diningroom through to the livingroom, giving separate but connected spaces. There is an open fireplace in the livingroom.

Set on the road side of the development, the C3 Ber-rated apartment has a westerly aspect, with a balcony off the livingroom. There are leafy green views of the tree tops in summer, but in winter traffic would be audible as it sits close to the intersection with Sandford Road.

There are two bedrooms, the main has a windowed, en suite shower room.

The development includes a laundry room, a small gym and a bike shed. The location is first class with good public transport and shops and cafes just a five-minute walk.

This own-door maisonette apartment is one of four located on the first floor in a late 1970s development of about 15, two-storey, redbrick buildings. A later block of 40 units sits in a taller building to the rear.

Set within lovely green surrounds the walk-up maisonette is reached at the top of a flight of stairs. The livingroom and adjoining kitchen are situated to the right and the two bedrooms are on the left. The bathroom is directly ahead. The sittingroom has a working open fire and a full-length, box window that streams in light.

The kitchen interconnects with the livingroom but because the unit is dual aspect they might work as two separate bright spaces. The F Ber-rated property, measures 65sq m (699sq ft) has a flat roof.

The location is near the Cross Avenue junction on Booterstown Avenue, a very busy road at school times with St Andrew’s College situated nearby. The N11 is about a 10-minute walk while the Dart is about a 15-minute walk.

Alexander Court was developed by hotelier Noel O’Callaghan and built in the late 1990s. The fourth-floor, single aspect unit has two bedrooms and one bathroom. The C3 Ber-rated property has an open-plan living area with a smart kitchen at one end leading through to a dining area with a living area that has access to a balcony. The property faces south and overlooks a communal garden.

The six-storey block is located close to the Twitter building and around the corner from Merrion Square. It’s an area of the city centre that is blissfully quiet at weekends. Pearse Street Dart station is a two-minute walk.

Lift: Yes, a small one

Gowran Hall is a redbrick, four-storey apartment block just minutes from the main drag of Glasthule village. Built in the late 1960s or early 1970s some of the units in the property have compelling sea views. Number 4 however faces the street, so doesn’t have the views, but it is situated on the ground floor where there is a ramp to facilitate wheelchair access.

The D1 Ber-rated property, which measures 70sq m (750sq ft), has been completely refurbished and includes an open-plan living-cum-dining area with an adjoining kitchen in tasteful grey. The property has two double bedrooms and one bathroom.

A key selling point is that this building has access to the roof, where there are spectacular views of Scotsman’s Bay. Access is via a very narrow set of steps and corridor.

Avalon is a low density block of 1980s apartments. This ground floor residence is small at just 50sq m (550sq ft), but the setting is magic. The two-storey block of just four units is set within a small scheme and has direct access to Sutton’s Burrow Beach from the complex.

The sittingroom has a wood-burning insert fire, there is a small kitchen off it and the bedrooms are two small doubles. The dual aspect property has a balcony off the livingroom and a larger balcony off the master bedroom. The latter overlooks the communal garden. The Dart station is about a five-minute walk. The beach is even closer.

Historically, this 1960s-built block was one of the best apartment addresses in Dublin. This two-bed, two-bath property needs a complete overhaul from new windows to electrics, plumbing, insulation, new bathrooms and kitchen. The 98sq m (1,054sq ft) property is on the first floor of a four/five-storey block and is roomy by new-build standards with a D Ber-rating. It comes with a garage for storage. It is a strong price when you consider a smaller in size (89sq m) but walk-in condition two-bed at nearby 21 Edward Square seeking €615,000 through Lisney.

However, the St Ann’s apartment has the advantage of a south-facing balcony overlooking the communal garden on the Ailesbury Road side of the development.

The management fee is a hefty €5,225 annually, but this includes heating and hot water from a centralised system.