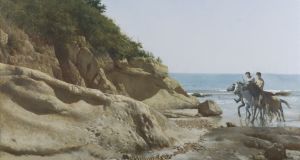 ‘Herding the Horses’ by Patrick Hennessy

Paintings from the collection of the late Brian Friel and his wife Anne are to be sold at auction in Dublin in September. The sale will be held at Adam’s auctioneers on St Stephen’s Green, with proceeds being donated to the Peter McVerry Trust.

“We very much appreciate Anne’s very generous support and kindness in donating this collection of paintings,” Fr McVerry said. “Proceeds from the sale of the art will greatly help us to provide our services to the growing numbers of people experiencing homelessness.” The sale is expected to generate as much as €100,000 for the charity, which aims to reduce homelessness and the harm caused by drug misuse and social disadvantage.

The Friel Collection comprises some 23 works by such well-known painters as Seán McSweeney and Tony O’Malley. They range in style from Norah McGuinness’s Evening Flight, which depicts waterbirds and gulls against a background of the Ringsend chimneys, to Patrick Scott’s Silver Painting, a tempera and silver leaf study on canvas which Adam’s describes as “the epitome of minimalism”.

Many of the paintings have very tangible links to the work of the late playwright. Basil Blackshaw’s Three Sisters was the image used for the programme of Friel’s translation of the Chekhov play, featuring on the cover of the Field Day production which premiered at Derry’s Guildhall in September 1981. Blackshaw’s Game Cock was bought by Anne Friel as a gift for her husband, because she thought the bird “had the look of a survivor about it”.

Friel was particularly fond of the photorealist paintings of Patrick Hennessy, and there are four works by this artist in the auction. In response to a query from Friel about the lack of a signature on one of his canvases, Hennessy – who lived in Tangier at the time – wrote a letter confirming the painting’s authenticity. He went on to compliment Friel on his book The Saucer of Larks and hoped that the playwright would “get as much pleasure from my painting as I did from your book”.

Adam’s says it is “delighted and honoured to handle the sale of the Friel collection, which will be auctioned as part of Adam’s sale of Irish art on September 27th.

“We are thrilled to be associated with this sale and as great admirers of Brian Friel’s work it is an honour to be entrusted with the sale,” said Adam’s managing director James O’Halloran.

“We are also in awe of Anne Friel’s generosity in donating the proceeds of the sale to the Peter McVerry Trust, arguably one of the best loved and regarded charities in the country. The works on offer are superb examples and all have had a personal resonance for both Anne and Brian, which makes the sale all the more poignant.

“We are looking forward to the September sale and our endeavours to generate as much as possible for the charity, which needs all the resources it can get.”