Babies of older fathers at risk of health issues 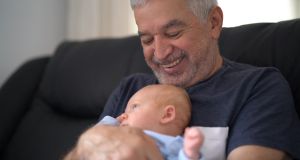 The latest CSO statistics showed the number of fathers aged in their 20s in Ireland fell to 17 per cent in 2017, from 23 per cent a decade earlier. Photograph: iStock

People are becoming parents at ever-increasing ages, a trend that can have implications for the health of the pregnancy, the babies and the women who give birth to them. But while most women know that reproductive risks to themselves and their babies rise as they get older, few men past 40 realise that their advancing years may also confer a risk.

The age at which couples start families has been rising steadily for several decades as more couples marry later and delay having children until they’ve completed their education and are secure in their careers.

Whereas a woman’s clock typically slows in her 30s and runs down by age 50 or so, it can go on ticking almost indefinitely for a man. Witness the celebrities – George Clooney, Hugh Grant, Steve Martin, David Letterman, John Stamos – who became first-time dads in their 50s or beyond.

“For so many years, it was assumed that advancing age only mattered for women,” Hilary K Brown, a researcher in reproductive public health at the University of Toronto, said. “Paternal age matters as well.”

A recent study of more than 40.5 million births in the United States revealed potentially harmful effects of advanced paternal age on a baby’s risk of prematurity, low birth weight, low Apgar score and risk of seizures, as well as the mother’s chances of developing gestational diabetes.

The study, published in BMJ and directed by Dr Michael L Eisenberg, a urologist and head of male reproductive medicine and surgery at Stanford University school of medicine, concluded that “more than 12 per cent of births to fathers aged 45 years or older with adverse outcomes might have been prevented were the fathers younger”.

Dr Eisenberg, Dr Yash S Khandwala and colleagues found that fathers older than 45 had a 14 per cent greater chance than fathers in their 20s and 30s of their babies being born prematurely and at low birth weight. The mothers too faced a 28 per cent increased risk of gestational diabetes. As the fathers’ ages rose, their babies were more likely to need help with breathing and require admission to the neonatal intensive care unit.

The risks associated with older fathers go beyond those obvious at birth. An earlier review of studies published by Dr Eisenberg and Dr Simon L Conti, clinical assistant professor of urology at Stanford, linked paternal aging to an increased risk of babies born with congenital diseases, such as dwarfism or developing psychiatric disorders, such as schizophrenia and bipolar disorder, and developmental ones, such as autism.

For example, a study of nearly 400,000 men and women born in Israel in the 1980s found that, among fathers older than 40, the risk of having a child with autism increased nearly sixfold. Other studies found that the risks of childhood leukemia and breast and prostate cancers were elevated among offspring of older fathers.

Lots of attention has been paid to the risks women face by delaying pregnancy beyond, say, age 35, but men have not been privy to comparable concerns about their fertility and possible health effects on a pregnancy or the children they father. Typically, older mothers are meticulously screened for possible risks to a healthy pregnancy, “while the father’s role in childbirth is often ignored or forgotten,” Dr Eisenberg and Dr Khandwala wrote.

Although the risks of fathering a child in one’s 50s, 60s and 70s are not huge, the recent studies have shown there are sometimes significant long-term societal as well as personal consequences. The challenges start with getting pregnant, which often takes longer when prospective fathers are older, Dr Eisenberg said. “Fertility is a team sport, and the runway for men is not unlimited. The ability to father a child declines as men get older. Semen quality diminishes – volume lessens with age, and the motility and shape of sperm decline a little.” Such changes reduce the ability of a man’s sperm to fertilise an egg.

There are a number of possible reasons older fathers may impart health risks to unborn babies. Unlike women, who are born with all the eggs they will ever produce, after puberty men continuously produce new sperm. Mutations can occur and accumulate in the DNA of sperm-forming cells, and environmental exposures can change the genes in sperm themselves. Some of those changes can affect growth factors for both the placenta and the embryo, Dr Eisenberg and colleagues suggested.

“There needs to be a greater awareness of the man’s responsibility to reproductive health,” Brown said, adding that this responsibility starts with a man’s “preconception health – factors like obesity, chronic disease and behaviours like smoking and alcohol consumption that could affect the health of a pregnancy. Given that close to half of pregnancies are unplanned, men can’t afford to wait to get healthy until they’re ready to have a baby.

“While it makes sense to delay reproduction to accommodate educational and career goals, couples should have full access to the risks and benefits of having children now or later. A man’s age has not been a typical part of the conversation.”

In an editorial accompanying the report on 40.5 million births, Brown emphasised that “current findings underscore the importance of including, in reproductive life plans, discussions of paternal age and declines in sperm quality.”

She suggested that doctors emphasise the need for everyone of reproductive age – future fathers and mothers alike – to adopt healthy lifestyles that can “pay off in a number of ways, not just in having a healthy pregnancy but also in preventing chronic disease. Physicians should be having these conversations with men, not just women.”

Of course, there can be significant advantages to having children sometime later in life than in one’s teens or 20s, maturity and financial security of the parents among them. Older parents may also have more time and patience to nurture their children. “Couples should have full access to the risks and benefits of having children now or later,” Brown said. – New York Times

Why do we feel sicker at night?
10