After five hours and 35,000 steps across Dublin my sore feet felt good

Rachel Flaherty: Finishing a task that I had put off for years was overwhelmingly satisfying 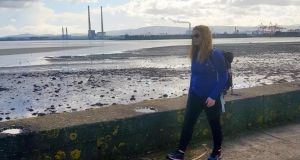 Rachel Flaherty: ‘As I set off for the second half of the walk the sun came out and the views across Dublin Bay were spectacular.’

“My feet are in bits, agony, and I already know I won’t be able to move tomorrow,” a woman exclaimed as she flopped down on to the seat on the Dart breathing a sigh of relief, “but wasn’t it a great walk – good for the soul”, she added smiling.

I nodded in agreement. She captured my exact thoughts as I couldn’t be prouder of my burning, hot, blistered and sore feet for getting me through a 26km Dublin walk.

The sense of satisfaction and sense of achievement on the train was palpable as strangers chatted about how much their bodies hurt and the challenges they overcame to complete the walk.

“My runners are worn through,” a man laughed. “Lucky my feet are still there. I thought I wouldn’t make it there for awhile.”

It was St Patrick’s Day with a difference for me this year and it felt good.

The annual walk is held is raise funds for mental health organisation Aware, which helps people with depression, bipolar disorder and mood-related conditions in Ireland.

For years, I’d often seen hundreds of people pass me by on the Harbour2Harbour walk from Dún Laoghaire to Howth (or vice versa) and I longed to join them but was daunted by the prospect.

I was more than 5½st (34kg) overweight and easily gave in to my excuses to not do it then and procrastinate about doing it the “next year”.

Looking back, my weight was irrelevant as I would have been more than capable to doing it, but my negative mindset and harsh criticism of my body that had grown each time I’d increased in weight and “failed” with a fad diet influenced my decision to not do it.

I’d become disconnected with my body and had lost confidence in what it could achieve.

Now I’d lost more than 3½st (22kg) and had a growing confidence in what I can push myself to do from trying different activities so I eagerly signed up.

On the Sunday morning of the walk, I grabbed my backpack feeling both excited and nervous, and headed to the starting line in Dún Laoghaire.

The walk doesn’t have steep hills but it is an enduring long walk around Dublin Bay. When I reached the top of the queue to check in a volunteer apologised that they had just run out of t-shirts because of a surge of registrations that morning.

I took my map and turned to see Stevie, a black Labrador dog, proudly wearing one of the last t-shirts. He wore it best and his enthusiasm to set off was infectious to all of us who stood around him.

The weather forecast was mixed that day with temperatures reaching about 10 degrees so I’d brought layers of clothes, rain gear and provisions in my backpack, and I felt prepared.

I hadn’t reached even 5km when I realised I’d made a rookie mistake – I was wearing the wrong shoes and socks.

I had chosen well-worn comfortable runners, but cushioning was too worn down and the balls of my feet were burning and inflamed after just a few kilometres.

My other annoying error was stupidly choosing the wear socks that persisted to slide to down into my shoes and make their way towards my toes.

I worried my socks error could possibly drive me crazy before I reached the finish line as I looked across the bay to see Howth far away on the other side.

It was about the 20km mark – when many who had niggles starting out – that a few people were limping, but everyone kept going

Then a shower of rain hit as a welcome distraction.

I looked around as people pulled on rain jackets and realised the wide spectrum of people doing the walk – all different ages, shapes and sizes.

I snapped out of my internal whinging noticing people with different abilities eagerly throwing themselves into the walk. The mood of the crowd as we moved along was uplifting, energising and friendly as people laughed and chatted.

At about 10km a man pulled out a packet of chocolate biscuits and offered them around. He was well prepared and our new friend.

We soon reached the “halfway-hooley” at Dublin Port where music played and refreshments waited.

Tea and a sandwich never tasted so good. As I set off for the second half of the walk the sun came out and the views across Dublin Bay were spectacular.

We started to meet people coming against us who had started in Howth, some smiling and others grimacing with each step, and walkers offered each other encouragement as we crossed paths.

It was about the 20km mark – when many who had niggles starting out – that a few people were limping, but everyone kept going. Some commented that they had underestimated the toughness of the length of walk, but were enjoying it.

Finally, almost five hours and about 35,000 steps I reached the finish line in Howth.

I did it and it felt great. Who would have thought blistered sore feet and achy legs would feel so good.

As I queued to get my completion badge, there again was Stevie the dog, still proudly wearing his t-shirt and greeting walkers.

Finishing a task I’d talked myself out of doing in previous years gave me a sense of satisfaction that overwhelmed all else.

My mind immediately moved to looking forward to the next challenge I could push myself to do next.

Part 1: I lost 3st and I’m stronger now
Part 2: Stuck in the weight loss plateau
Part 3: Friend called my fitness holiday a fat camp
Part 4: My plan is driving me up the walls
Part 5: It is slow and fluctuates but has stayed off
Part 6: Why are we doing this? This is terrifying
Part 7: I want to form new habits
Part 8: I gained 4lb. My fear of failure returned
Part 9: It’s time to face my nemesis – running
Part 10: Losing weight without trying
Part 11: Letting go of the shame and guilt helped
Part 12: Habits have led to weight loss
Part 13: I’ve fallen in love with running
Part 14: The mountain doesn’t care who you are
Part 15: Unhappy relationship with food and my body
Part 16: I stopped trying to be perfect
Part 17: Lunchtime workout worth the hassle?

Sign up for one of The Irish Times’ Get Running programmes (it is free!).

First, pick the eight-week programme that suits you.
– Beginner Course: A course to take you from inactivity to running for 30 minutes.
– Stay On Track: For those who can squeeze in a run a few times a week.
– 10km Course: Designed for those who want to move up to the 10km mark.
Best of luck!