Why more dads need to talk to their daughters about periods

Actor Michael Sheen: The stories women have shared have really moved me 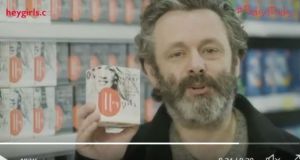 Actor Michael Sheen appears in a video as part of the campaign to encourage more fathers to speak to their daughters about periods.

For many fathers, the notion of discussing periods with their daughters is about as appealing as a drug-free trip to the dentist.

Enter #Pads4Dads, a new campaign aimed at encouraging fathers to overcome their own awkwardness and discuss all things menstrual with their daughters.

The campaign is the brainchild of Hey Girls, a UK-based social enterprise that works to eliminate period poverty. The group conducted research which found that many fathers do not feel equipped to talk about periods with their children.

A survey found that 4 in 10 men had never learned about periods in school. Just 41 per cent said they felt comfortable discussing periods with their daughters while nearly half had never broached the topic at all. One in three fathers said they had never purchased period products.

Actor Michael Sheen, himself the father of a teenage daughter, is the face of the campaign. He has recorded a video imploring men to educate themselves and get in on the “bloody conversation”.

Today I'm debunking the common myth that Dads can't (or won't) get involved in talking periods with our daughters. Thanks to @HeyGirlsUK for bringing Dads to the table with all we need to know #Pads4Dads https://t.co/HgfyLpZaqp pic.twitter.com/J531cEmHfn

“If you’re out shopping for your daughter, you know what food they like, right?” he says. “But when it comes to pads and tampons, you don’t have a clue. I have a daughter, I get it. It can feel hard to start the conversation, but that’s okay.”

With that in mind, the campaign has devised a neat overview, advising fathers on everything from “how to talk to your daughters about periods” to “buying period products”.

The response to #Pads4Dads has been positive with women relaying their own stories of dads coming to the rescue when they were on their period.

Michael Sheen wrote that he was a “bit overwhelmed” by the reaction and thanked women for sharing their stories.

“The stories women are sharing of either why it’s so needed or how much their Dads have helped them have really moved me,” he wrote. “So thanks for that.”

The campaign couldn’t come a moment sooner. For far too long, we have tiptoed around the subject of periods, speaking about them in hushed tones for fear of causing offence or embarrassment. Far from saving one’s blushes, this attitude has helped reinforce the idea that periods are a source of shame.

The result is that half of the population are forced to walk around the office with tampons pushed up their sleeves lest someone find out they have their period (gasp!) while the other half barely feel comfortable saying the word out loud.

That’s where fathers can help. Instead of constantly deferring to mum or ominously referring to “women’s problems,” they can buck up and educate themselves on the ins and outs of periods. In doing so, they will empower themselves to have open conversations with their children and help destigmatise periods once and for all.