An affair throws a grenade into a relationship; what follows is a matter of trust

The relationship you knew is over; it’s time to let a new one begin, if you can 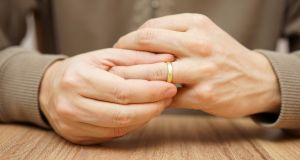 Common outcomes to an affair include the end of the marriage or an attempt to rebuild the relationship. Photograph: iStock

We don’t know what percentage of married Irish people have been unfaithful.

An affair throws a grenade into a long-term relationship and the question that inevitably arises is whether the relationship can survive it.

O’Shaughnessy has worked with couples for nearly 30 years so his views, I think, carry some weight.

If so, their task becomes to build that new relationship. If they don’t want a new relationship then they will, of course, move on, but he strongly recommends that each person makes the time to grieve for what they have lost, including the dreams they had for the relationship.

Naming, talking about and experiencing the pain and devastation caused by the affair is also a vital step towards recovery.

It seems to me that this is often not acknowledged sufficiently by the person who has had the affair. They can become impatient with the injured party’s endless questioning about what went on – but they need to accept it is the other person who was injured and that regaining that person’s trust is not the work of a week, a month or maybe even a year.

O’Shaughnessy believes accepting that the couple’s old relationship is dead actually acknowledges the impact the affair has had and that this acknowledgement is good for the future.

It means they don’t have to get stuck in trying to rebuild an old relationship that doesn’t exist any more because it was broken by the affair.

If they then decide they want to create a new relationship with each other, they are free to to work out what needs to be different. “All couples I worked with reported that this was more positive and led to a better understanding of their individual needs and expectations within the relationship,” he writes

As I said above, having an affair throws a grenade into a marriage or into a long-term relationship. The late Peggy Vaughan, a psychologist who specialised in work around the impact of affairs, wrote that outcomes include: recovering personally from an affair but at the expense of the marriage ending; keeping the marriage going but at the cost of their own happiness; or both parties recovering personally and making their marriage a good one.

- Padraig O’Morain (@PadraigOMorain) is accredited by the Irish Association for Counselling and Psychotherapy. His latest book is Kindfulness. His daily mindfulness reminder is free by email (pomorain@yahoo.com).