TB has not gone away despite major efforts to eradicate it 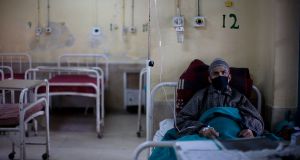 A TB patient in Srinagar in Indian-administered Kashmir. According to the World Health Organisation, there were more than 10m new cases of TB diagnosed around the world in 2017. Photograph: Yawar Nazir/Getty Images

Last month Canadian prime minister Justin Trudeau travelled to Iquilat, the capital of the territory Nunavut, to say sorry. He was there to offer northern Inuit residents a long-awaited apology on behalf of the federal government for the widespread mistreatment they endured during the tuberculosis (TB) epidemics of the 1940s, 1950s and 1960s. He referenced past governments’ “colonial” and “purposeful” mistreatment of Inuit people with TB.

After forcing nomadic Inuit families to permanently settle in established communities in the mid-20th century, the federal government began to annually dispatch ships equipped with doctors and nurses to care for the population’s health needs.

Yet those who tested positive for TB were not allowed to leave the ship. Instead they were moved south to sanatoria across the country without their families hearing where they had gone.

Between the 1940s and 1960s, nearly half of Inuit in the eastern Arctic were taken from their homes to southern Canada for treatment of the disease. And for the many who died, even now families don’t know where their relatives are buried.

While I could find no historical reference of forced migration to sanatoria in Ireland, application to the High Court has been necessary in a small number of cases where patients with advanced TB were refusing isolation.

There can be no doubt about how devastating the disease was in 20th century Ireland when one reads books like From Sanatorium to Hospital by Dr Tim Healy. James Plunkett’s classic novel Strumpet City graphically describes how TB affected the residents of the 3,500 or so tenements in Dublin city around 1913.

Droplets in the air

Caused by the bacteria mycobacterium tuberculosis, TB is spread by droplets in the air. A person with infectious TB can expel TB germs when they cough, sneeze, laugh or spit, and people in the surrounding area can then inhale these.

Each person with active infectious TB infects on average 10-15 people a year. Yet many people who become infected never go on to develop the disease. Instead the bug lies dormant in the body, and the person is said to have “latent” TB.

The symptoms of full-blown TB are varied and depend on the organs affected. For the lungs, typical symptoms include cough, sputum which may be flecked with blood, and chest pain. Weight loss is also common and the patient may experience night sweats. Tiredness and loss of appetite are other features of the disease.

TB can also infect bones in the spine and may infect the lining of the spinal cord, leading to TB meningitis. TB in the pelvis can lead to infertility.

Despite much valiant effort over the years, TB has not gone away. According to the World Health Organisation, there were more than 10 million new cases of TB diagnosed around the world in 2017.TB remains one of the top 10 causes of death worldwide.

Back home, in 2018 some 315 TB cases were notified to the Health Protection Surveillance Agency, corresponding to a crude incidence rate of 6.6/100,000 people. This has remained steady in recent years.

Treatment involves at least a six-month course of a combination of antibiotics if you’re diagnosed with active pulmonary TB, where your lungs are affected and you have symptoms.

After taking antibiotics for two weeks most people are no longer infectious. In recent years, however, multidrug resistant (MDR-TB) cases have become more common. MDR-TB is defined as resistance to at least isoniazid and rifampicin, the two most effective anti-tuberculosis drugs. Treatment of MDR-TB necessitates the use of second-line agents, including a new oral-only regime introduced last year.

One thing remains constant: whether here or in Canada, it is the marginalised in society who continue to bear the brunt of TB.