A horrific fall in 2012 left Jim Clancy facing permanent paralysis. Since then, his resilience has been tested – but never broken 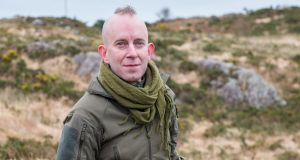 Jim Clancy who suffered a life-changing fall in 2012: “Most of us learn as babies to perambulate. We don’t ever have to think about such a basic, but complex, task again. Walking is just taken for granted.” Photograph: Donal O’Connell

There is nothing remarkable, you may say, about a healthy, able-bodied, middle-aged man completing a 92km trail over five days in west Cork.

Except that I am not able-bodied.

In June 2012, a fall that ended in a horrible landing left me with an acute lesion in the spinal cord and creeping paralysis from the shoulders down.

I broke my neck. I did not let it break me.

It was an “incomplete” injury, so I had some sort of a chance. I did not die.

The condition is described by the American Spinal Injury Association as one occurring in the cervical region, with sacral scarring and loss of power in the limbs, worse in the arms than in the legs. With me, none of the aforementioned appendages worked.

They call it tetraplegia or, if you prefer, being quadriplegic. Paralysed from neck down, forever. All the well-worn paths of communication between brain and body were severed. Time to begin again.

Time to come to terms with never making the grades as a concert pianist. Wasn’t much good at piano to begin with, mind. As for winning an All-Ireland final at Croke Park with the Clare footballers? Well, I’m asking you.

My familiar sphere of control was distorted and destroyed. Flight or fight?

The first gargantuan challenge in such circumstance is to accept the truth. Being bedridden, I had to admit escape was not a realistic option. Important to focus on what I could do rather than dwell on what I might never be able to do.

Physiotherapy began with learning how to breathe effectively again. During those six weeks at the Mater hospital, Dublin, all lingering delusions of self-importance and self-sufficiency gave way to the stark realisation I needed others to assist me in this primal, brutish struggle to survive.

Morphine helped for sure to dull the pain. But not the affliction of abandonment when the exquisite woman I was seeing for quite some time could take no more and rendered her goodbyes, wish her well.

Eventually I graduated to the National Rehabilitation Hospital for a three-month residence. From cleaners to consultants, everyone at Rochestown Avenue seemed concentrated on my recovery. Myself, however, began to hear the black dogs bark and was concentrated more on gaining arm strength sufficient to push the wheelchair off Dún Laoghaire pier. Yes, with myself tightly strapped in.

Before reaching that point of ability, I overcame bowel and bladder dysfunction. A small miracle happened: I could ambulate. For good measure, Baker’s Corner public house was just a tortured imitation of a walk away. Not the noblest of reasons to transcend, but it helped.

The Austrian psychiatrist and Holocaust survivor Viktor E Frankl said the worst thing that can happen to anyone is being in a way of physical incapacitation which renders such helplessness. The same man came up with an equation: D=S-M (Despair equals Suffering minus Meaning). A case for tragic optimism.

Going from being a vigorous, able-bodied man to sudden invalidity – and all because of a momentary falling-out with gravity – is traumatic. I did not choose it.

But bad things happen. It’s part of the human condition. There are things we cannot, or don’t, control. From such a catastrophic fall the only way is up. And though in the throes I thought at times to get well enough only in order to quit this life, now I mean to get well enough to enjoy it before I am too old to do so.

And though muscles atrophied or went into frequent spasm, neural pathways were eventually prodded and bullied into use.

Luckily, I had gratuitous physiological capital. The previous year I had attempted to walk across Europe, and though forced to abandon before finish, that trek got me in rare physical shape. A huge help on the road to recovery. As was a positive mental attitude.

Although the ability to walk may make me appear less disabled than someone chair-bound, the less obvious impairment of the arms can render appearances deceptive. Or so they say.

I made it back to work. Nice job that it was, and with lovely people. Each day I presented for work, but by the time I entered the newsroom of The Irish Times was exhausted in mind and body.

Was the proverbial duck, calm on the surface but paddling – and puddling – furiously. No one ever witnessed me faint. Or poo my pants – and that without me even knowing it. No, Dublin 2 was not the right place to make a targeted recovery.

Eventually, my gentleman’s walking cane brought me as far as possible from the teeming populous. I found a small, mighty community in west Cork good enough to take me in. Where the old are warm in winter and happier in summer. Big hills to the north, sea to the south, and surrounded by delightful, caring people.

Rather than going home alone to Silicon Quay, off Misery Hill, I live in a very different, and healthier, environment. Right choice at the time of making it.

I doubt they had people with physical disabilities in mind when they constructed waymarked trails. Getting over stiles is difficult when you have inadequate proprioception: an unreliable grasp of the relative position of one’s body parts. You could leave any one of four limbs behind without realising it. I haven’t thus far. At least to my knowledge.

How is it they have advanced so far with artificial intelligence – the computer can bamboozle the greatest chess grandmasters – yet they cannot make machines walk like us, replicate our gait and balance? Come to think of it, all a blade runner has to do is look out for those who move as if they have pokers up their bums.

Most of us learn as babies to perambulate. We don’t ever have to think about such a basic, but complex, task again. Walking is just taken for granted.

Second time around is not so easy, and it’s certainly less fun. It takes massive concentration to stay upright. Especially on hills. Just must be done.

Every few years, people more educated than me come up with a new cure for repairing a severed spinal cord. Electrode placement in back, stem cells from nose. The only positive results I experienced have come from physical therapy and intestinal fortitude.

By the way, if you think this peninsula is called The Sheep’s Head because of a certain class of woolly animal, well, you’re mistaken. Rinn Mhuintir Bháire (also known as Muntervary) is predominantly cow dairy-farming terrain. Though I’ve seen feral goats up in the hills.

The early Christian Kilnaruane standing stone, just this side of Bantry, depicts two rams with horns interlocked. It is said to illustrate two Old Testament tribes of Israel in a war neither could win or lose. They carried on regardless.

It represents resilience. I present it.