Obesity myths and the harm they cause

Before we tackle obesity, we need to reconsider our thinking about its causes 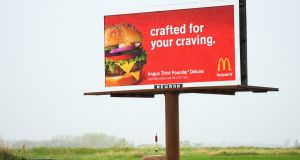 A billboard along a US highway with advertising for McDonald’s, specifically for its Angus Third Pounder Deluxe.

There is a way of talking about obesity that we are used to – frightening statistics about its rise, especially in children, warning messages to government about how to fight it, guidelines for parents and schools on how to behave with children and food, and evolving conversations with industry about how to act responsibly.

But to get anywhere in addressing it, we need to re-think some of the fundamental misconceptions about obesity.

The myth of self-control

Variously called “personal responsibility” or “willpower”, this is the myth that the more self-control a person has, the skinnier they will be. There’s a lot of baggage in this myth: from our equation of thinness with harder work ethic and discipline in general, to our tendency to look for direct causes of clear effects. But it is not always the case. We humans are extremely complex, and sometimes not just irrational, but perverse.

One example is the so-called “licensing effect”, more colloquially known as the “what the hell effect”, which is that feeling you get when you give yourself permission to do something indulgent because you have earned it, like going for a run and then eating chocolate. Well, it’s been shown that the licensing effect works vicariously: even just thinking about going for a run makes me more likely to eat chocolate.

Studying this, Keith Wilcox in the Journal of Consumer Research showed in 2009 that the mere presence of a healthy food option vicariously fulfils our desire to eat healthily and drives our attention to the least healthy option in the choice set, giving us the licence to unconsciously reward ourselves with more tempting and less healthy food choices.

To make matters worse, this effect is strongest in people who have the most self-control, because they are the ones who set goals like running and eating healthily all the time.

So, adding healthy options to an otherwise unhealthy menu may seem like a responsible and progressive action for fast food chains to take, but it can have a boomerang effect with unintended consequences for the health of consumers and end up doing much more harm than good.

If you aren’t advertising to children, then you’re not marketing to them

Anyone who has ever sat in a marketing class has been shown a picture of an iceberg. An arrow points to the tip of the iceberg, saying “advertising”, but another arrow points to the boulder underneath, and says “marketing”. That first image is to make students understand that marketing is not just advertising: it is market research and sensing, pricing, packaging, retailscape design, channel distribution, service logic, and much more.

Take retailscape design – the spatial strategy of stores to engineer a fine balance between display on the one hand and disorientation on the other. Work here is on designing things like “decompression zones” – those transition spaces immediately inside the door of a shop designed like a grand prix chicane – proven to slow people down from “street speed” to “shop speed”.

Research has shown that if a supermarket gets shoppers to remain for more than 25 minutes, they enter the golden phase – when we move from making rational decisions (“Check, check, check, the list is being ticked”) to making emotional decisions (“Oh, what’s that interesting thing at the end of this aisle that has nothing to do with the products I was looking for in the aisle?’).

What stimulates our children’s desire to consume unhealthy food is not just advertising: it is the wider, much more subtle marketing strategies seeping into the lighting and the ambient music. It’s in the new pricing strategies of the past 15 years which include combos, two for one and tie-ins. It’s in packaging design and channel distribution. And digital profiling and decision heuristics. And on and on.

The notion that education and physical activity is all that is required to mitigate this is a myth that recurs in media and policy in Ireland. If obesity is a flood, our solution appears to be to get our kids to swim harder, rather than lowering the water level.

Corporate social responsibility (CSR) is the ethos that shareholder maximisation is not the raison d’etre of any given company. That may be true, and food brands are definitely guided by other, nobler concerns. But any strategy that compromises the long-term value of the brand will be shoved in a drawer. Now, of course, someone can list examples of brands that adopt brand initiatives that are short-term losses, but never, ever, long-term ones. This is not because food brands are “evil” – there isn’t some brand genius in a room with a cat on his lap thinking up ways to make children overeat. Brands are economic assets within a corporate portfolio.

A single company can have a lot of sub-brands, some of which have conflicting brand values. So Lucozade might have introduced a diet version of every energy drink it sells, but Lucozade is just one brand within a Japanese conglomerate called Lucozade Ribena Suntory, whose other brands include lots of sugary and alcoholic drinks. Kellogg’s make Pringles. Coca-Cola owns Costa. Food industry companies frequently adopt this house-of-brands architecture to prevent consumers making associations between them. One of the aspects of the house-of-brands architecture is that the corporation doesn’t necessarily act with a single voice.

Consider McDonald’s, whose corporate social responsibility is filled with feel-good words like: “The basis for our entire business is that we are ethical, truthful and dependable.” But its shareholder report speaks in a different manner, that’s all about “Converting casual to committed customers . . . so they visit more often, by elevating and leveraging the McCafé coffee brand and enhancing snack and treat offerings.” This is reminiscent of the Roman God Janus, who, with two heads, could talk two different ways at the same time.

Junk food companies, like others that make products which damage health, are necessarily Janus-faced. Their CSR officers are not the people who write their shareholder reports. Their food scientists are not the people who design their advertising campaigns. But Janus isn’t a lack of joined-up thinking either. Rather, it is a convenient tool that allows business as usual to continue. To truly understand food companies, we need to analyse shareholder reports, not the myths of CSR reports to get to the truth of Janus.

We need to scrutinise the influence that industry has sought on government strategies to improve public health and ask if what they say is true, fair, measured and constructive and whether it is the interests of the public or their shareholders that matter most to them.