My life, my muse and a gentlemanly master chef 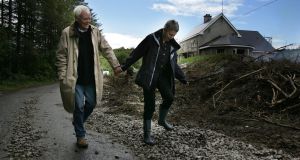 Steph and Tony Booth walking near the house they were renovating near Blacklion Co Cavan. Photograph: Frank Miller

A doctor encounters thousands of patients in a lifetime’s work. Some they remember, while others fade away into the depths of memory. Most of us have treated a celebrity at some stage, and have found that they have the same biology as everyone else, whether they know it themselves or not. Some patients become friends, and one or two can change your life.

Tony Booth was a celebrity before the term was used, a household name from the Telly in the days when everybody watched the same programme at the same time. He was, briefly, a patient of mine, a friend, and he changed my life more than anybody who ever came through my office door.

He was not the only well-known person in Blacklion, Co Cavan, when I was the GP there many years ago. Neven Maguire was a cheery presence in his restaurant across the road, and the nearby towns of Manorhamilton and Sligo were full of writers, sculptors, musicians and artists. When we heard that Tony had moved to rural Ireland it was a nice, new and exotic addition.

Tony and his wife Steph were tall and elegant. He wore a long tweed coat with a flat cap and managed the difficult task of looking like a bohemian, a working class chap and a distinguished actor simultaneously, and if ever I met someone with a twinkle in his eye it was Tony Booth.

I took to Tony and Steph immediately, and I fear many a patient was kept waiting as he held me enthralled with stories about smoking dope with the Beatles, or drinking sessions with Richard Burton. It was heady stuff for a country doctor. “Laurence Olivier never liked me!” he announced one morning, and while I have an answer to most problems, that one left me stumped. We once spent an evening trying out ways to say “Anyone for tennis?” in increasingly menacing tones . They both embraced west Cavan with gusto, walking their pack of dogs along the bothreens and taking part in rural life with great good humour.

Steph and Tony were extremely impressed by The Irish Times. In fact they were so impressed that Steph told me that she intended to write for the paper, and asked did I know any of the editors. As it happened I did, and as a country GP is used to making all kinds of referrals, Steph was introduced to Deirdre Falvey. Her first column appeared soon afterwards, and it continued on and off for a dozen years, turning into a brave chronicle of Tony’s years with dementia and ending with his death. The series has been an inspiration to many carers who now know they are not alone in their struggle. Steph told the stories of her difficult life with spirit, humour and love.

Creative people inspire creativity in others. In those days in Blacklion Steph was writing for The Irish Times, and Neven was writing cookery books at a great rate and making TV shows while running his restaurant. It made me think that maybe I should get going myself. Tony was full of encouragement. If he could make it as an actor, he declaimed, without having any formal training and despite the fact that Olivier disliked him, then I could make it as writer. So I wrote my first story, appropriately enough, about Tony. He was disguised, to his amusement, as an elderly actor, and it appeared in the British Medical Journal, which was admittedly a bit Establishment and apparently caused eyebrows to be raised in Downing Street. It was a great score on the board for a first venture and it encouraged me to continue writing. Soon I was writing for The Irish Times Health Supplement myself, and I have been writing ever since for all kinds of publications. It is the thing for which I am best known, and if I am remembered at all it will be as a writer.

Doctors tend to leave a lot of their early selves behind them in the daily grind of study and work. If they are lucky they will meet people who will remind them about their first passions for music, sport or whatever they loved from the start.

A consultation is a two-way process.There is give and take. I give medical advice every working day. Patients, in turn, have given me sound advice on beekeeping, fishing, gardening, cars, computers, and music. Only one so far has given me acting lessons. It is also true to say that he changed my life, with added inspiration from his wife and a gentlemanly master chef. Tony was my friend, my patient and, if a muse can come in the form of a six footer in a tweed coat, my inspiration. Thanks Tony.

Flights of angels sing thee to thy rest Kid.

Bloom to Zoom: garden fest is online with chats and tips
10