Being prime minister and a mum? ‘It’s what ladies do’ 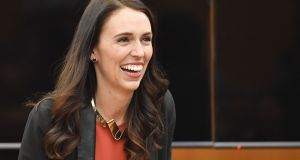 If New Zealand prime minister Jacinda Ardern’s beaming smile put a grin on our collective face when she swept to victory last year, her announcement on Friday that she will give birth to her first child in June, is surely the first genuinely exciting political news to come out in the fledgling year.

You’d have to be the tin man not to feel your heart stir at the palpable happiness of Ardern and her partner Clarke Gayford as they prepare to “expand from two to three”.

Given the hard time female politicians are given when it comes to the issue of whether they can do their jobs and be mums, I don’t blame the happy couple one iota for keeping the news to themselves for a solid few months.

Ardern was grilled on live television about whether or not she planned to have children just hours after becoming Labour leader last year. Her statement posted on Facebook clearly indicates she expects similar questions about whether she can run a country and have a family to resurface.

In addition to daggy jokes about Gayford’s intention to remain “first man of fishing” as well as become a stay at home dad, Ardern was careful to reassure everyone that she will not forget her responsibilities, and will indeed be “prime minister AND a mum.”

Asked by a reporter how she managed to set up a government at the same time as having morning sickness, Ardern replied: “It’s what ladies do.”

Aside from her infectious excitement, it’s refreshing to see her so deftly sweep aside any potential arguments that she can’t be both prime minister and a mother. Not that we can blame the many women who feel like they can’t have a similarly demanding job and be devoted mothers, given women are still navigating a system that assumes women will be the primary caretakers of children and does so very little to help them juggle their professional and personal lives.

When we ask women if they can have a career and a family, what we are really doing is telling them it is somehow selfish to want both and really, they have to choose.

That’s why it was both disappointing and understandable to hear former Australian parliamentary member Kate Ellis, for instance, announce she was quitting federal politics because, with her son due to start school in Adelaide during the next parliamentary term, she felt she couldn’t be in Canberra. “When I thought about all the things that I would miss, I just decided that it would make me miserable.”

No such misery, of course, was felt by former UK prime ministers Tony Blair and David Cameron, both of whom were residing in Downing Street when their respective wives gave birth.

Ardern will not be the first leader to give birth in office – Pakistan’s Benazir Bhutto had that honour, giving birth three months after getting elected in 1988. Bhutto had campaigned in the Muslim-majority nation while visibly pregnant, something you have to wonder if Ardern, who received confirmation of her own pregnancy during the campaign, could have pulled off in a western society that fancies itself as advanced but that is still averse to the idea of mothers being devoted politicians.

Bhutto made history, winning an election that she says her nemesis General Zia called early because he was certain that a pregnant woman could not campaign. “I could, I did, and I won,” she later recalled defiantly, “So I disproved that notion.”

Ten years later, Republican candidate Jane Swift was on the campaign trail running for lieutenant governor in Massachusetts when she announced she was pregnant. She did not expect the level of criticism she received, much of it from within her own party, questioning whether she could campaign and be pregnant at the same time.

‘’I knew it would be a story . . . I did not expect we would be getting involved in a debate as to whether or not women should work when they have children,’’ Swift told the New York Times.

“My first reaction was, ‘thank God she’s not having an abortion’,” said Evelyn Reilly, who was then executive director of the Christian Coalition of Massachusetts, injecting an irrelevant if entirely predictable dimension to the story, before adding: “This is a good opportunity for us to discuss the broader issue, which is, does institutional day care compare with a parent caring for the child in the home?”

Swift had hoped her pregnancy would provide an opportunity to move away from questions about whether or not career women should get pregnant to a conversation about how families could best go about juggling daycare and meaningful work responsibilities.

“But we really haven’t gotten there yet,’’ she said.

Twenty years later, we still haven’t. But, with Ardern firmly stating that while 2018 will be the year she will “become a mum,” it will also be the year her government pursues all of its priorities, and she looks forward to “leading that work”.

Perhaps her no nonsense approach is just what need to help us get there in the end.