How long should a severely disabled child have to wait for a wheelchair in Ireland?

Fiona King has been fighting a long and frustrating battle to get a desperately-needed wheelchair for her son Adam (3½), who suffers from a brittle bone disease 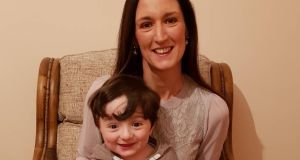 Fiona King and Adam: It’s just so disheartening, so hurtful, to see that we’re putting in such a huge effort and vital things that the Government should be providing as their responsibility to look after these children in this way, they’re not doing it.”

In January, the Irish Government committed to formally ratifying the UN Convention on the Rights of Persons with Disability at the end of March.

The ratification of the Convention will not just be a practical boost to people with disabilities, but a psychological one as well, despite the shameful length (12 years) it has taken the Irish Government to ratify it.

However, on the ground, people with disabilities are still not experiencing the care and equal treatment they need.

On July 18th, 2017, Fiona King, from Cork, submitted a form to Enable Ireland for a wheelchair for her son Adam, who is now 3½ years old, and suffers from osteogenesis imperfecta (OI), a brittle bone disease.

“All of Adam’s bones are fragile,” King explains about her son, “They grow in an abnormal fashion, so his limbs are quite distorted. His little legs require 16 surgeries to straighten them, so he’s due to have a surgery next month. His arms are quite dipped, the upper arms. He’s of extremely short stature, so he’s 3½ at the moment and he’s about the height of a 13- or 14-month-old baby. Obviously, that affects his mobility.

“He cannot walk unaided. He can take a few steps with a walking frame but fatigue will overpower him, so he can go a few metres and take a break and start again. Really the walking is just token walking at the moment. We hope that he be able to walk in the future, but he will always need a wheelchair because of his short stature and because the fatigue is so much.”

Applying for a piece of equipment is quite a complicated process. Enable Ireland makes a list of children who require equipment, wheelchairs, walking frames and so on. They prioritise a child according to need. That list is submitted to a group called the RAG group – Resource Allocation Group – in Cork, who are looking at patients in the whole of Co Cork and the whole of Co Kerry. One of the issues the Kings have is that there is no separate “pot” of funding for children. Similar lists from the Hope Foundation, Brothers of Charity, all of the hospitals in the area, and so on, are submitted to RAG. Even though the needs of adults and children are so different, they are drawing from the same funding, according to King.

In December, Adam reached number one on the Enable Ireland list, but due to “emergencies arising”, he dropped down to number four. Even if you are at number one on one list, King says, you could stay in that position for a few months as the RAG meets and assesses who is number one on all of the different lists and allocates funding for equipment. When funding is eventually cleared for Adam, he will then join another list as his chair needs to be custom made and can’t be purchased off the mainstream market – the chair needs to accommodate the contours and specifications of his body. The manufacturing of the chair will take about another six weeks.

In August, Adam will start preschool, and the King family are desperate to have his wheelchair in time so they can teach him how to use it, how to hoist himself onto a toilet seat, park himself at a desk, and so on – “at home we’ll have to practise all of that”, King says. “It’s a lot of work for a little person. I suppose our mantra the whole time is denying a child a wheelchair, a basic piece of equipment, is a violation of human rights.

“Adam’s dignity and safety are compromised on a daily basis. It is affecting his social, emotional and psychological development because he no longer wants to be in a buggy. It’s not age-appropriate for him. When we go out to parks, playgrounds and birthday parties, he’s really active and enthusiastic and an inquisitive little boy, so he wants to get out of the buggy.

“He’s down on the ground and he can crawl, but he’s accessing everything on the ground then. So when people are talking to him, and they’re up at a height talking down to him, a lot of people think he’s a baby, so they’re saying ‘look at the lovely baby’, and he’s turning around saying to them, ‘I’m not a baby, I’m big’.”

It has been a long journey for the Kings.

When Fiona was pregnant, a scan showed that Adam’s legs weren’t developing properly. As various things were ruled out, at 24 weeks, Fiona and her husband received the diagnosis of osteogenesis imperfecta. There was no way of diagnosing whether it was type two – the fatal type – or type three. Their doctor knew of a groundbreaking trial happening in Stockholm at the time, and so at 28-weeks, Fiona and her husband flew to Stockholm, and had treatment involving an infusion of stem cells injected via the umbilical cord, the theory being that the cells graft on to the body, strengthen it, give it resilience and reduce the number of fractures. King was the third woman in the world to have this treatment.

He’s doing things that nobody ever thought he would do

“Adam is better and healthier and stronger than nature every intended,” King says, “He’s doing things that nobody ever thought he would do. He’s passed all the milestones set out for him. He was able to stand up at 15 months when the target was two years. He was able to stand up and take some steps at about 2¼, when the target had been four to 4½. And he has not sustained any fractures since birth, bar one fracture last March when he fractured his femur on the day of his sister’s birthday.”

“We’re lucky in that, okay, Adam is severely disabled, but he’s not PEG-fed, he can eat, he’s not on breathing apparatus. He is actually quite healthy outside of his condition, he’s not ill. But so many parents are at home consumed with the care of a loved one, PEG-feeding, bowel-cleaning, monitoring the breathing apparatus, hoisting the child from one place to the next . . . they don’t have the time to come out and speak about it.”

They fact their son has overcome so much, from in utero – where his bones were fracturing and repairing as he was growing – to receiving groundbreaking treatment, to excelling upon birth, to managing to avoid the frequent fractures that many children with his condition suffer, are all massive achievements. But these achievements are bittersweet when something so simple and vital –a wheelchair – feels out of reach.

“Adam will be out in the world of work making a fantastic contribution in some way,” King believes. “But it’s just so disheartening, so hurtful, to see that we’re putting in such a huge effort – your life in consumed by medical appointments, hospital admissions, physiotherapy at the clinic, daily physiotherapy at home, everything that you do you’re putting in every single effort that you can to make your child better – and vital things that the Government should be providing as their responsibility to look after these children in this way, they’re not doing it.”