Opinion: Anger and sadness can co-exist with relief and gratitude. They don’t negate one another 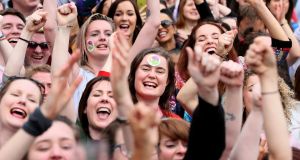 ‘I don’t feel fantastic. I don’t feel joyful. And speaking to women over the weekend, I know I am not alone.’ Above: Yes campaigners wait for the official result of the Irish abortion referendum, at Dublin Castle in Dublin on May 26th. Photograph: Paul Faith/AFP/Getty Images

On the morning of Saturday May 26th, my Dad beamed at me. The official referendum result had yet to be announced, but it was already clear that Ireland had voted for the Eighth Amendment to be repealed – and it was clear to my Dad how much this would mean to me.

A proudly obstreperous feminist and pro-choice academic, I spent two years interviewing Irish women who had travelled for abortions and wrote an MA thesis about their experiences. Last year, I received funding to expand upon this topic for a PhD, under the theme of Gender and Citizenship.

My bookshelves teem with tomes about abortion, feminism and exile, and trying to study them intellectually has often been emotionally exhausting, knowing that in Ireland this is not theory, this is not history, these cruelties are being inflicted upon women every single day.

But now, that was over. Apparently.

“You must be delighted!” said my Dad. “You must be dying to go out and celebrate now that the world feels a bit freer. You must feel fantastic.”

I understood what he meant, just as I understood the thousands of women and activists who did joyfully celebrate yesterday. It marks the end of a hard-fought battle that many activists have been fighting for literally decades.

And it doesn’t undo the damage that has already been inflicted, doesn’t undo this country’s history of cruelty and oppression. So I felt relieved, but far from joyous.

My subdued reaction made some people uncomfortable, as they equated my lack of jubilance with a lack of gratitude for the work that went into getting the Eighth Amendment repealed, or that I was critical of their celebration. This is not true.

I am deeply grateful, and think everyone who wanted to celebrate on Saturday absolutely deserved to.

But another truth is that Irish women have been through decades of trauma because of anti-abortion laws, and now we have to process that. Another truth is that emotions are complicated, and multi-faceted, and can fluctuate and co-exist. Anger and sadness and numbness can co-exist with relief and gratitude, and experiencing one doesn’t negate the other.

But there didn’t seem to be a lot of room for that this weekend. Some anti-choice people publicly criticised Repealers for celebrating, equating joy with a lack of awareness of the gravity of the issues at hand – as if anyone understands the gravity of reproductive rights more than women.

And in smaller, more personal interactions, some pro-choice women were pressured by men and by their pro-choice peers to express only joy and gratitude.

I was repeatedly asked “Why aren’t you happier?” – not as a question, but a rhetorical demand, as were other women who reached out to me online. When an acquaintance asked how I was, I hadn’t even responded before they rolled their eyes at my hesitation, saying “Oh shut up Roe, it’s great, enjoy it.”

Another person reacted similarly when I failed to smile during a conversation about the results, commenting “Oh, shut up your face.” The instruction didn’t make me feel better, merely let me know that which reaction was acceptable, and which wasn’t.

On Saturday night when I admitted to some pro-choice women that I didn’t feel the happiness they were exuding, they admitted to me that they didn’t really feel it either, but they felt they had to perform, to support the spirit of the day, to avoid bringing other people down or making anyone feel uncomfortable.

Some of this pressure to perform unequivocal happiness was external, as comments such as “Get over it” were directed at women who expressed conflicted emotions.

And some of it was also undoubtedly internal, as women silenced their own residual anger or sadness or sheer exhaustion, in order to not make others uncomfortable. This is the type of caretaking emotional labour we are socialised to perform.

I don’t blame anybody for celebrating, and I presume some people’s quieting of others was unintentional. But this is an opportune time to respect, acknowledge and listen to the range of women’s experiences, and remain aware of the pressure we often feel to silence ourselves in order to make others feel comfortable.

When I tweeted that I wasn’t feeling amazing after the referendum results and said I thought it was okay if other pro-choice women didn’t either, several women responded saying “Thank you” – a small sign that many were waiting for permission to express themselves. Up to that point, they seem to have felt that to do anything but conform to a one-dimensional narrative of experience wasn’t socially acceptable.

Their admissions reminded me of a theme that emerged during my research around abortion: the demand for women to only express one emotion. The women I interviewed who had abortions all felt intense pressure to conform to the socially accepted emotional scripts which are constantly enforced through both personal and public discourse; discourse that was constantly echoed this year.

Most experiences are a blend of different emotions, and yet we often implicitly and explicitly demand that women feel only one thing, in order to make a simple narrative, in order to make everyone feel comfortable.

How about we stop telling women what they must feel, and listen instead?

Apart from denying the complexity of women’s emotional realities, the representation of only pride and joy after the referendum points to a desire to distance ourselves from our horrifying history, and the continuing underlying societal issues that perpetuated the denial of women’s autonomy for so long – the underlying misogyny.

“Misogyny”, incidentally, was a word suspiciously absent from the debates, precisely because it makes people feel uncomfortable. We had to be quiet about that, too.

But misogyny was indeed at the heart of this debate over whether the country wanted to give women the right to control what happens to their bodies, just as misogyny was at the heart of historical travesties such as the Magdalene Laundries, Mother and Baby homes, symphysiotomies, contraception laws; and prevailing modern-day issues such as the cervical cancer cover-up, sexual violence, gendered violence, the gender pay gap, and rape culture.

The fight against rape culture may provide us with a useful parallel of how to move forward from the referendum results, and why we shouldn’t expect all women to feel jubilant right now.

The moment any abuse stops is the moment the hard work of reforming and healing begins. That’s not a joyous prospect, it’s a difficult one. Ireland needs to face that prospect. We now need to do that work.

On Saturday, women who had travelled for abortions were applauded when they declared “We will never have to tell our stories again.” I hope they do continue to tell their stories. We need them to. Because women’s stories and emotions have been silenced for far too long in order to keep us comfortable, in order to stop us from confronting the pain we inflict upon women, in order to allow us to ignore the misogyny that has historically defined our nation and continues to affect it.

Real change won’t come from powering forward in self-congratulation, but by looking back in order to truly understand, to truly reform.

Let’s start with respecting women’s feelings, in all their glorious and real complexity. Let’s stop making assumptions and enforcing narratives. Let’s listen to them instead.

It will be painful and joyous and traumatic and freeing and empowering and uncomfortable all at once. It will be necessary.