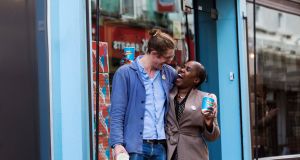 The last time Aletta Ndhlovu ran a marathon was more than 20 years ago. She loved sport growing up and was very involved in athletics at school in South Africa. “Running was my hobby so I missed it. Since I’d come to Clonakilty I was so bored and was looking for something to do with my time. I knew I’d benefit from running.”

Ndhlovu is one of 5,346 women, men and children living in direct provision centres across the country. She lives with her 20-month-old son in the Clonakilty Lodge centre in west Cork and had been searching for a place to go running since she arrived in the town nearly two years ago. A couple of months ago she spotted a poster in the town calling for participants in a project called Cork Sanctuary Runners.

The initiative was set up earlier this year by Cork-based journalist Graham Clifford as a way for local people to meet and get to know residents in the county’s direct provision centres. “I wanted to provide a bridge so that people could make these connections. I knew Cork was bidding for city of sanctuary status so I thought it would fit with them.”

Some 170 people, including more than 50 from direct provision centres, have signed up to take part in the Cork City Marathon on June 3rd since the project launched. Clifford has divided most participants into relay teams which include at least one resident from a direct provision in Cork city and county. Others have the option of running a half or full marathon.

Ann O’Regan from Clonakilty Road Runners has been training on Tuesdays and Thursdays with Ndhlovu since early April in preparation for the race. She says the project has helped overcome the divide that exists between the local Clonakilty community and people who she says feel stuck in the centre. “They don’t know if they’re welcome into the community or not, whether or not they should interact. They don’t have money to go out and socialise, it can be very difficult.”

Ndhlovu says running helps her forget the everyday stresses of life. “I’m so happy to be taking part in the marathon and I can’t wait for it. My son keeps me very busy but my friends look after him when I go running. I feel so good doing it.”

Abdiaziz Mussa, a journalist from Somalia who lives in the direct provision centre on Kinsale Road, says the running has allowed him to focus on his health rather than dwelling on the time he has spent waiting for an answer to his asylum application.

“It was my first time running, I had not done much before. Before this I felt so isolated but it gives me an activity to feel more alive. I really appreciate the people who came up with this idea and hope others will follow. It contributes to better integration and mental health in society.”

Dr Angela Flynn, another participant in the project, agrees that asylum seekers’ participation in Cork Sanctuary Runners enables them to take a break from the pressures of living in the limbo of direct provision.

“Asylum seekers and refugees are consistently portrayed in misery but they don’t want to be seen like that, they want to be happy. And you should see the happy faces of everyone running around the past few days. We’re there to show that we’re all one human race.”

Flynn got involved in the running project through University College Cork where she lectures in nursing and acts as a mentor for younger students hoping to study at the college. “Exercise is a stress reliever, it releases positive hormones that make you feel better. It’s a superb way to be mindful, all you need to do is put one foot in front of the other.

“Running is an equaliser. We’ve all got the same parts, the same bones and muscles. These people want to be outside and active, they would be working if they could. This fantastic initiative is good for the soul and for the body.”

What sold for about €385,000 in Kilmainham, Glenageary, Howth and Beaumont?
Real news has value SUBSCRIBE