‘This is awkward ... My flatmate wants me to pay more rent’

Tell me about it: Our unequal arrangement was agreed a year ago so why should I budge? 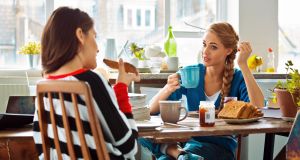 I am living in Dublin. When myself and my flatmate were looking for a flat together we came upon one that was more than my budget. However she wanted it so much that she suggested she pay extra to make up the rent as she earns more than I do. Having assured me that this was fine, we have been paying unequal rents for the past year.

I have recently received a small raise at work. Now my friend is trying to save more money and has asked if I would split the rent with her evenly. This is awkward as I feel like we had an agreement from the outset regarding rent, and my raise does not really improve my financial situation. A rise in my rent would be a significant addition to my expenses. However, I do understand her point of view as we do both live in the flat and share everything else evenly.

Is there a right answer?

The difficulty here is two-fold: one, you have an agreement where your flatmate pays more than you, as she really wanted the flat; the second difficulty is one of fairness – she (and maybe you) feel that there is an issue of unfairness now that you have some extra money.

For a full year your agreement stood as it appeared to be fair given your unequal incomes, but this agreement has to be reviewed now as circumstances have changed.

In all relationships, fairness is a fundamental issue and it needs to be defined and redefined many times over the course of any connection. For example, it may be fair that one person does the bulk of the housework while another is studying for something important, or it may be fair to expect that one person gets to choose the country a couple might live in if the other person moved for them at an earlier time.

We are generally very sensitive to fairness and this is why so many arguments are had over seemingly small things. A flatmate might have a huge outburst over their milk being used, but often this is related to a more underlying sense that their stuff is not being respected. If we are not to fly off the handle or break up a perfectly good pairing over these things, then we need to be able to talk about what is going on.

Of course, when we are uncomfortable about something, or we would rather not face up to it, we avoid the conversation but this usually results in rows or outbursts of anger where no listening or understanding happens. So courage is required to ask for a conversation about rent and fairness. This will display respect for the other person as their opinion is being sought and the likelihood is that she will say yes to this conversation. However, you may want to signpost some of the potential pitfalls by flagging what you fear. You could say: “I’m worried that I will agree to something I cannot afford” or “I’m worried you will get upset”.

We are often so afraid of conflict, that we avoid communication

Usually, the other person will say that they will manage their own emotions and you say you will manage yours – then you can get into the conversation properly. Begin by asking questions (rather than making statements) as much as possible. Ask what she thinks are the important issues, what does she see as the blocks to solving the issue or what she likes about sharing with you?

Always keep the idea of the importance of having a happy home close as this will keep you on target and you won’t get drawn into a tangent. It is unlikely that you will solve the problem in one conversation, so the best option is to say that you both should reflect on what has happened and that you should talk again in a week or so about it.

The added danger here is that if the other person has a sense of huge unfairness, they will feel used and this could turn a very good flatmate relationship into one of bitterness and resentment. Your courage in bringing up this conversation will lessen the possibility of this happening and it might allow your friendship to deepen instead of eroding. Try not to anticipate the outcome of your discussion but rather keep an open perspective – using questions should ensure this happens. We are often so afraid of conflict, that we avoid communication and can thus loose a really good friendship.

Do not let this fear and avoidance take over and trust that engaging with your flatmate will ensure your friendship gets the best chance of surviving and thriving.

London’s Irish pubs: all the lonely people, where they go to belong
Real news has value SUBSCRIBE