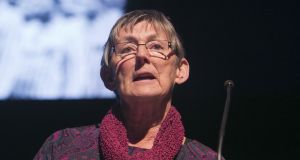 Mary Banotti: “My mother told me she’d written ‘Undecided’ across her ballot paper and I burst into tears.” Photograph: Gareth Chaney/Collins

For many of the women in Dublin Castle, the referendum result was the result of days, weeks or months or work. For others – some in the castle, some watching from home – it was the end of a lifetime’s journey.

Madeleine Taylor-Quinn was pregnant with her first child in 1983 when she campaigned against the Eighth Amendment. The former Fine Gael politician had been expecting twins but lost one of them at 11 weeks.

Even today she remembers the hatred directed towards her on account of her stance against the amendment. “I was being subjected to an awful lot of very graphic and savage imagery in documents that were being posted to me.”

Back then Leinster House was more open. Visitors had freedom to roam the building. Three supporters of the amendment cornered her in a corridor. “I had nowhere to go, my back was to the wall. I actually felt intimidated.

“I find that totally inhuman and un-Christian behaviour. It shows intolerance and a lack of understanding. It shows an inability to imagine yourself in someone else’s circumstances,” she says.

Former Supreme Court judge Catherine McGuinness received anonymous letters calling her a “prostitute” and a “murderer”. “I got one letter saying, ‘You are a worse prostitute than Mary Robinson’,” she chuckles.

Dr Mary Henry, who then dealt daily with women facing difficult pregnancies, recalls how a man who used to cycle around her home, shouting, “You’ll go down, down, down,” and pointing to the ground.

The experience of campaigning for abortion 35 years ago was light years away from the experience felt by those who urged a Yes vote in Friday’s referendum. Back then, pro-choice were the minority. The majority still relied on the Catholic Church guidance and instruction, recalls Mary Banotti.

“I remember on the day of the vote asking my mother how she voted, which is something I had never done before. Voting was absolutely sacrosanct in our family. She told me she’d written ‘Undecided’ across her ballot paper and I burst into tears. It was such a radical thing to do.”

Like others, McGuinness remembers Mary Robinson’s warnings that the 1983 amendment’s wording would simply store trouble for the future: “Every single one of those things Mary said happened.”

For Henry, the greater influence of women in Irish life has been key. “There weren’t many women doctors back in 1983 and especially women doctors with children. The last time the conversation was hugely male, the men were telling us what to do.”

Thirty five years ago, Henry was one of the few doctors who campaigned for abortion. “Some of my patients were in a terrible position, some who had previous deep vein thrombosis and pulmonary embolisms and were at risk of further trouble if they had another pregnancy.

McGuinness says: “And what would happen if a woman dies with a house full of children? Those children had rights too. We’re so hypocritical about women’s reproductive health.”

For Catherine McGuinness, Saturday’s result shows that misogynistic control of women is in retreat: “I’m not saying [it is] all gone but it [is] a big step in drawing that to a close. Ireland has become more adult, more honest.

McGuinness says the 2018 campaign debate has been far more civilised than 1983 and that, aside from the rhetoric of a small number, both sides have behaved “properly and respectfully”.

“People realise Ireland has changed a lot since 1983. The church has disappeared off the field and they’ve kept out of the discussion to a greater extent.” She also says the Yes side has run a strong, coherent campaign. “I was involved in the lawyers against the amendment in 1983 and there were a lot of little groups who didn’t get themselves properly joined up, partly because people thought we were wicked baby killers so it was hard enough to organise.

“I feel the Yes has really learned from the people who ran the marriage equality referendum. They worked well in keeping disparate groups together.”