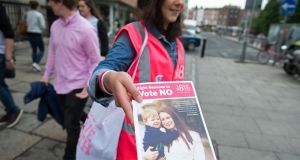 Campaigners for the Love Both during the referendum campaign. File photograph: Barry Cronin/AFP/Getty

Anti-abortion groups in the United States have reacted with disappointment at Friday’ referendum result, which saw the country decisively vote to repeal the Eighth Amendment to the constitution.

As one of the few countries in the developed world to outlaw abortion in most cases, Ireland had long been been on the radar of many pro-life groups in the United States, with many prominent anti-abortion activists travelling to Ireland in the weeks running-up to the referendum.

News of the referendum result was covered by most major news organisations over the weekend, leading online coverage in the New York Times and Washington Post.

“Ireland voted decisively to repeal one of the world’s more restrictive abortion bans, sweeping aside generations of conservative patriarchy and dealing the latest in a series of stinging rebukes to the Roman Catholic Church, ” wrote the New York Times in its front page story on Sunday. “The surprising landslide, reflected in the results announced on Saturday, cemented the nation’s liberal shift at a time when right-wing populism is on the rise in Europe. ”

While the result was covered extensively on the international channels of networks such as CNN, it received a more cursory mention on the US-based channels such as MSNBC and Fox News.

The reaction from pro-life groups was swift.

New York-based Expectant Mothers Care, run by Irish-American Chris Slattery, called on Irish anti-abortion activists in Ireland to launch “alternative to abortion” centres in Ireland aimed at those with unplanned pregnancies. He said that “pro-life outreach” was now needed given the “now, inevitable, upcoming launch of abortion facilities, sooner or later in Ireland.”

Americans United for Life expressed sadness that the people of Ireland “have paved the way for abortion on demand in their country,” noting that the organisation had played a major role in the introduction of the eighth amendment in the first place.

“AUL offers our support to the pro-life people of Ireland - we continue to stand with you and thank you for your valiant efforts to defend life,” said the organisation’s chief executive Catherine Glenn Foster. “If the global pro-life movement continues to work together to advance the cause of life, we have every faith that we will see a day when everyone is welcomed in life and protected in law.”

Human Life International, the world’s largest global anti-abortion organisation, which has an affiliate office in Knock said that the evil of abortion was now in “the land of St Patrick.” Fr Shenan J Boquet, president of the association said: “Ireland was a beacon for the West, indeed the entire world, enshrining and upholding the life of both the mother and her pre-born child. Now she has abandoned her defence of women and nascent life and gone astray.”

But pro-choice groups welcomed the vote.

Kieran O’Reilly of RepealNYC, one of the many oversea branches of the Repeal the Eighth movement worldwide, said the group was “ecstatic” at the result and “overwhelmed” by the margin it passed by.

“For many of us, this vote represents more than the changes to the Constitution and the legislation that will be passed,” he said from Ireland, having travelled home for the referendum “We are rejecting the culture of shame and fear that has plagued Ireland, from Ann Lovett, the Mother and Babies homes and every single person who had to seek an abortion and keep it secret.”

He said that the Repeal the Eighth group in New York and elsewhere was ultimately about “a bunch people who haven’t even necessarily met, finding each other and trusting each other and working and organising with each other to create a better world.”