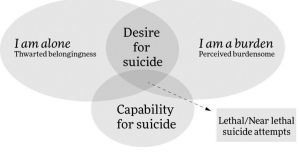 Many employers may not be aware of their legal obligation to assess the potential for suicide among their workforce, and to put in place a mental health strategy, the Psychological Society of Ireland annual conference in Kilkenny has been told.

The society, the professional body for psychologists in Ireland, heard the desire to die by suicide comes from a sense of disconnection from others and lack of belonging – key factors frequently found in the workplace – combined with a belief that one is a burden on others.

Presenting a paper on at the conference, clinical and counselling psychologist Eoin Galvin outlined Thomas Joiner’s Interpersonal Theory of Suicide which considers three sets of circumstances which together lead to suicide attempts.

These were, he said “thwarted belongingness” and “perceived burdensomeness” which produce the desire for suicide, while the third circumstance was the capacity to overcome a person’s own natural fear of death. Under this model, Mr Galavan said, a combination of desire and ability will precede most serious suicide attempts.

The strength of Joiner’s theory was that it could be tested empirically and Dr Galavan said there were examples in workplaces in Ireland and Europe where employers were currently in court because of alleged failures to respond to workplace stressors that contribute to suicidal risk.

Dr Galavan said it was not sufficient for employers to respond to suicide of a worker, or even to hold a pro-active conversation about suicide in the work place, but they should have active training for managers and a strong preventative strategy in place to ensure the circumstances for suicidality do not flourish. “Many employers do not realise their legal obligations under the Health and safety act” he said. “It has to be more than, we had a meeting about it.”

Dr Galavan said there appeared to be some trades and professions which were more exposed to suicidality and researchers internationally had developed a scale as a useful tool in assessing suicide risk. The National Office of Statistics in the UK had published data outlining the risk of suicide per occupation. The construction industry for example, he said has a significantly elevated risk. However, he said working in an industry with higher risk “doesn’t infer cause, just that the risk factors are there” .

Mr Galavan said there were number of resources of which employers could avail in addressing the challenge posed by suicidality in the workplace and these included workplacesuicideprevention.com which was dedicated to making suicide prevention a health and safety priority at work.

The conference will be addressed on Friday by CervicalCheck campaigner Vicky Phelan who will speak on the psychological impacts of illness and trauma on family members of those directly affected by diseases such as cancer.

Food foraging: Bring a little of the wild into your eating and drinking
6

‘I make myself small and stay quiet’: Experiences of racism in Ireland
7