The hard and fast rules when it comes to diet 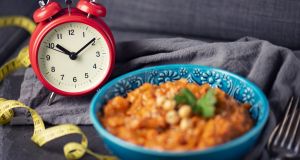 It’s the latest hot topic. It seems every other person is doing some form of fasting these days. All sorts of acronyms get bandied about – there’s the 5:2, the 16:8, the Fast 800, intermittent fasting (IF) and alternate-day fasting (ADF).

It’s been touted as the solution to everything from getting clearer skin, weight loss and increased longevity but is fasting a health fix or is it just a fad?

You can do this by skipping breakfast, eating your first meal at noon and your last meal at 8pm. Then, you’re technically fasting for 16 hours every day, and restricting your eating to an eight-hour eating window. This is the most popular form of intermittent fasting, known as the 16:8 method, and foollowed by a host of celebs including Jennifer Aniston.

Popularised by British journalist Dr Michael Mosley, the 5:2 diet consists of five days of the week that are normal eating days, while the other two restrict calories to 500-600 per day.

Alternate-day fasting is another approach – the basic idea is that you fast on one day, and then eat what you want the next day.

This fasting lark, while on trend right now, is not new.

Plutarch and Plato were big fans of fasting. The Greeks observed that sick animals did not eat and saw that it should be no different for humans. They believed fasting could both heal illness and improve cognitive function.

And almost all religious and spiritual practices throughout the ages have advocated fasting in one form or another. Buddha, Jesus and the Prophet Muhammad all fasted and believed in the power of fasting for physical, mental and spiritual benefit. A large number of religious fasting traditions are still practised today.

There is definitely something in it though.

Consultant rheumatologist Peter Browne believes there are definite benefits in fasting, but it’s not something that should be done in isolation. Browne, who works at the Bons Secours hospital in Tralee, says the evidence that intermittent fasting has health benefits is pretty clear. “My initial interest in fasting was patient driven. Many of my patients want to try a non-medicine approach when they first see me for treatment and for some of them, fasting has very beneficial results.”

He admits it’s not for everyone. “There’s a cohort of patients who would struggle with adherence so it’s not an approach that can be universally applied, but there is no doubt that fasting can improve metabolic health with improvements in weight, blood pressure, cholesterol, and improved blood sugars in many patients.”

Fasting has benefits over and above weight loss too. Browne says it makes sense that allowing our bodies a break from eating, will divert energy to renewal instead. “We have evolved to be in sync with the day/night cycle, ie, a circadian rhythm. Our metabolism has adapted to daytime food, night-time sleep. If our bodies are not digesting food at night, then there’s time for repair.”

This is a well-documented benefit of fasting – autophagy, which plays a role in controlling inflammation and boosting immunity. “When you fast, your body tries to save energy, and one of the things it can do to save energy is to recycle a lot of the immune cells that are not needed, especially those that may be damaged – the first cells to go are the faulty ones”. If you are intermittent fasting, this will happen while you are asleep, Browne says.

“It’s more than calorie restriction, it’s about changing your hormones. There is strong evidence to show that fasting lowers insulin levels. Healthy adults experience a reduction in insulin levels after fasting. Part of insulin’s role is to regulate blood sugar. Too much insulin has been linked to obesity and other chronic health conditions like heart disease, and diabetes. If insulin is known as the fat storage hormones and is produced in the presence of glucose [carbohydrates], then the best way to lose weight is to reduce insulin via fasting or carb restriction. It’s common sense really. There is no more potent way to lower insulin than to fast.”

For Tony Murphy, fasting has made a massive impact on his health. A shift worker, he was about 25lbs overweight when he went to the doctor with breathing problems. “I had shortness of breath, I was sleepy after eating and I just felt out of sorts.” A chat with a dietician got him overhauling his diet. “After that chat, I knew I needed to make a change. I went to my doctor and I didn’t want to take medication if possible. We agreed that I would adopt some healthy eating guidelines and stop eating at 6pm every day.”

He ate brunch mid-morning and a healthy lunch and dinner – now he has lost 20lbs, is sleeping properly and has brought his cholesterol down to normal levels. “It’s a very simple idea, but combined with a bit of exercise and choosing more healthy food, I’ve managed to avoid the risk of a lifetime of illness and medication.”

There are some caveats though.

Some health professionals have expressed concern about the rise in fasting and warned that some people should absolutely not dabble in this eating style.

Bodywhys, the Eating Disorders Association of Ireland, has warned that anyone who’s previously struggled with an eating disorder or experienced disordered eating behaviours should steer clear of fasting.

Similarly, pregnant women, teenagers and anyone with a medical condition should not fast. Always check with your doctor before embarking on any diet regime.