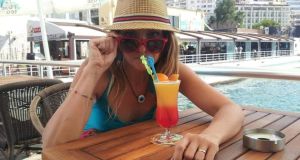 Lisa Bench: ‘I literally ran myself into the ground. Exactly the same as with the booze’

Even in his cocaine-bingeing years, which culminated in his car being shot at by drug dealers, Charlie Engle was the top salesman at the fitness club he worked at. You might call him a high achiever.

Now Engle is an ultramarathon runner in some of the world’s most inhospitable environments, and author of the memoir The Running Man.

Part of the attraction is the pursuit of novelty. “In my view, drug-taking is very much about chasing firsts,” he says. “The absolute best I ever felt in relation to drugs was actually the acquisition of the drug. There’s nothing more powerful than having the drugs in my pocket; the idea of what it can be.

Swapping substances for running – over any other sport – is common. The addiction and recovery website thefix.com regularly publishes running articles, and memoirs about this lifestyle swap include Catra Corbett’s Reborn on the Run, Caleb Daniloff’s Running Ransom Road and Catriona Menzies-Pike’s The Long Run.

In the case Menzies-Pike, the former “gin-addled bookworm” used to eye runners with suspicion as she nursed her lattes and hangovers. She had spent a decade adrift after the sudden death of her parents before it struck her that she’d been preoccupied with distance and endurance and running away, so perhaps the logical answer was actual running.

Now the Sydney-based editor has run five marathons. “I was not at a great point in my life,” she says. “I really hadn’t dealt with the death of my mum and dad at all, but when I started running there was this quick conversion, and then a whole lot of other things started to fall more into an orderly shape. I started to sleep better and eat better, and I started getting trashed less. There was structure that came into my life.”

It’s an outcome echoed in new film Brittany Runs a Marathon. Its title character – a heavy drinker who is overweight and has low self-esteem – hasn’t processed the death of her father. She goes to the doctor hoping for a quick fix of Adderall but is instead prescribed exercise. Brittany decides to aim for the New York City Marathon, and her training helps her get her life on track.

Menzies-Pike says: “Running gave me a space to deal with the fact that I f***ed up the grieving process. I found tremendous emotional variety in that space, and I would have these periods of total relaxation as I looked at a beautiful Sydney waterside view, and then other periods of experiencing physical resistance. Then there were periods of total emotional turmoil, where all of these suppressed feelings would rise up and I’d be running against them.”

When a person gives up one dopaminergic behaviour, such as taking substances, they’re likely to experience cross-addiction and chase the same sense of stimulation in something else. But why long-distance running in particular? Both behaviours require a capacity for endurance, provide a sense of release, can instil the intoxicating feeling of being an outlier, and can be solitary pursuits.

Running produces boosts in dopamine, noradrenaline and serotonin in the first instance, with the more hard-earned “runner’s high” of endorphins and – some researchers think – an endocannabinoid called anandamide coming later.

A person might reasonably expect that when they give up substances their behaviour becomes less self-centred but, as Maley points, out: “You need to find other ways of coping with stress and managing your emotions. After I stopped drinking I was much more self-absorbed and spent much more time in my own head – no one tells you how self-absorbing the process is. Running was really good for stilling my mind because it’s quite meditative.”

By her own admission, Menzies-Pike used to view runners with suspicion and, as Engle notes, extreme training can elicit more comments of concern from people than getting wasted ever did.

“People regularly ask me, ‘Do you think that’s healthy?’ ” he says, laughing. “I’m going to sound very judgmental, but I think people who criticise very likely feel badly about themselves. In my experience, it’s rarely based in true concern. Because if they’re around me enough, they’re going to see how running makes me happy.”

It can be true that those with an all-or-nothing mindset may wind up overdoing it. That was the case for Lisa Bench, an administrative assistant. “I literally ran myself into the ground,” she says. “Exactly the same as with the booze.”

When she stopped drinking, Bench was drawn to the sugar she was missing in alcohol. To counteract her unhealthy diet, she decided she needed to exercise excessively. “I started on the treadmill but I didn’t want to be known as that chick at the gym on the treadmill for 90 minutes, Monday to Sunday,” she says. “Because then you’ve got a problem.”

So she started pounding the pavement, where people might not notice; first 5km, then 9km, right up to 24km – all before getting to the office by 8.30am, buzzing. Tracking her progress with apps made her more obsessive. “I’d think, Maybe I could not put make-up on today. Maybe I could get away with not washing my hair so that I can get more of the run in. I’ve got an eating disorder as well, because that’s closely linked with alcoholism, and I was running on practically nothing.”

She became thin and exhausted with an unshakeable headache, so she finally took heed of her husband’s pleading and took a day off. She went to see an acupuncturist and stopped running altogether. But she feels restless. “I get bored so quickly,” she says. “It’s all about escaping reality for me.”

Engle says: “I see tons of addiction in the running community that doesn’t necessarily manifest in drugs but in other behaviours. There is something that’s not fulfilled. It’s not a negative, it’s just a space that needs to be filled with something other than normal living – because I personally don’t have any interest in being in that safe middle ground.” – Guardian