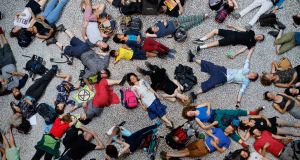 Extinction Rebellion climate change activists lie on the floor as they perform a mass “die in” in the main hall of the Natural History Museum in London. Photograph: Tolga Akmen/AFP

Anybody can become angry – that is easy, but to be angry with the right person and to the right degree and at the right time and for the right purpose, and in the right way – that is not within everybody’s power and is not easy.
– Aristotle

When we are attacked or experience a threat a normal emotional response is to get angry. Anger is an ancient and primitive reaction designed to motivate us to defend ourselves and to take action to tackle a threat.

Anger is a positive powerful emotion and we could not survive unless we were able to feel it to some degree. The problem with anger though is that it is an irrational unsophisticated emotion.

Anger must be directed at someone or something and frequently it hits the wrong target. An angry person can disengage their reasoning mind and identify an over-simple cause and a scapegoat to blame. When enraged we can lose our ability to be empathic or to appreciate complex situations where responsibility is shared or not easily identified.

Unfortunately, angry people can be easily manipulated and this can happen on a collective scale. Populist politicians and lobbyists can capitalise on people’s anger at economic hardship and mobilise this against scapegoats and easy targets such as immigrants and refugees rather than an economic system that privileges rich people.

Anger has the potential to divide and polarise like no other emotion. When angry we want easily identifiable ‘goodies’ and ‘baddies’ and a society under threat can get split into warring factions whether this is right or left, leave or remain, unionist or nationalist. Each faction becomes enraged at the other and mutual understanding is lost.

Now as we enter into the era of climate and ecological crisis who are we becoming angry at?

As we experience increased floods, heatwaves, climate refugees and economic recession who do we blame? Climate deniers direct their anger at scientists and activists for raising the issue in the first place.

Big corporations and politicians try to focus public anger away from them having to lead change and onto consumer choice. Responsibility for climate change is presented as a problem of personal choice (people just have to recycle more) rather than the result of an unsustainable economic system which is destroying the planet.

Use the positive energy of anger

As mentioned in the first two articles of this series, people worried about climate breakdown can easily become anxious, overwhelmed and depressed at the challenge it presents. The companion emotion of anger can act as an antidote to these disabling feelings. Whereas fear can make you freeze or avoid acting, anger can motivate and drive you into action. Whereas depression can disable and deflate you, anger can energise and move you out of inertia. Focused well and tempered with good judgement, anger can give you the courage to fight for a better world.

Avoid splitting into them and us

In the climate breakdown debate, those on the right are attacked for destroying the planet and those on the left are attacked a naïve tree huggers who want to wreck the economy. This splitting into ‘them and us ‘ is very damaging to the social cohesion and co-operation that is necessary to tackle the collective problem we all face. Even within the environmental movement there are splits between those proposing the ‘right’ solutions and arguments over who is most ethically consistent in their own lifestyles. These splits reduce the effectiveness of all groups. Though angry, we need to maintain our ability to empathise and cooperate together as a society.

In my work with families in serious conflict, one of the most useful techniques I have learnt is to invite them to externalise the problem they are arguing over. Rather than personally attacking and blaming one another, I invite them to consider the problem as external to them both and then to bond together to fight it.

In a similar way, rather than personally blaming individuals for climate breakdown, we can identify it as a problem as affecting us all and build co-operation to fight it collectively. Rather than fighting individuals, fight the system that is causing the problems.

Work on changing society and the economic model that is the root cause. Externalising a problem does not mean you let those in power off the hook as they clearly have the most responsibility for change.

But it does mean you avoid demonising the individual in power and instead work on persuading them to change. In addressing the problem of power use the democratic system and vote for parties advocating justice and system change.

Feeling angry without taking action can be toxic to the individual who can become ill-tempered and embittered. Learning to express your anger appropriately through thoughtful and constructive action is the key to good mental health.

Two of the most inspirational movements in the last year have been the school strikes championed by Greta Thunberg and the extinction rebellion driven by ordinary concerned people.

Both provide a positive outlet for justifiable rage at the destruction of our planet and both are thoughtful and focused in their targets. Using the dramatic vehicles of ‘strikes’ and ‘peaceful ‘rebellion’ draws attention to the unfolding crisis and the focused messaging of campaigning for system change is direct and clear (such a setting clear goals for zero emissions)

Changing yourself as well as society

Channel your anger to motivate personal change as well as campaigning to change society. In taking action to tackle climate and environmental breakdown, action is needed on all levels. We need to make personal choices to consume less (such as flying less, growing your own food or campaigning for change).

We also need to make community choices such as sharing resources, establishing local food and energy co-ops. We also need to make national choices such as decarbonising our electricity production, reforming our agriculture and transport systems as well international choices to work in co-operation with other nations to a common goal of saving our planet.

As the consequences of climate breakdown increase and society becomes more angry we will need to work hard to avoid the easy route of scapegoating, intense conflict and societal fracture. The key is to channel our anger into positive co-operative action that brings us together rather than driving us apart.

Feel angry but act thoughtfully in a measured co-operative way.

– This is the third article in the Changing World, Changing Minds series which explores our emotional response to the climate emergency and biodiversity collapse that surrounds us.
Part 1: Eco-anxiety
Part 2: Denial
Part 3: Channelling anger
Part 4: Coping with grief
Part 5: Talking to children