My father died at 39. I named my daughter in honour of him

‘You see friends with their own two parents and you think: why haven’t we got that?’ 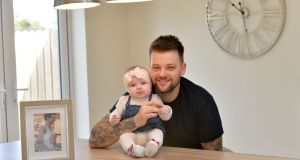 Ciarán Foley with his daughter, Robyn and a photograph of his late father, Robert. Photograph: Alan Betson

Ciarán Foley is co-owner of Area 9 Barbers on Store Street in Dublin city centre and a first-time dad to baby Robyn.

He was just seven when his own father, Robert, died aged 39 from melanoma. “I don’t have too many memories, to be honest,” Ciarán says. “He was big into his running and he worked for Eason,” he recalls. “The one main thing I remember was going down to Killarney for a family holiday. And my mam has a home video where we’re all dancing around and listening to Michael Jackson. He was big into his music.”

Ciarán’s daughter was christened recently, and he says big occasions such as this mean the void left by his father’s death feels even more palpable. “You’re thinking, I wonder what it would be like if he was here. He’s missed obviously all the grandchildren he has now.

“You get moments where you could be out somewhere, it could just be small, little things, but you see friends or family with their own two parents and you think: why haven’t we got that?”

Impending fatherhood reminded Ciarán that he didn’t have his dad to “ask advice or look at what he’d done”.

“My mam did the two jobs,” he says. “I learned from watching the things she did. My mam only commented the other day when she heard me singing these songs I make up off the top of my head to Robyn, that my dad used to do stuff like that. So I must have picked something up from him.”

“I have small things to remember him by,” says Ciarán, including “commemorative tattoos. Before he died he wrote each of us letters. He obviously knew he was sick, so we all have letters that we can look back on, whenever we’re missing him.”

Baby Robyn’s name is a tribute to the grandad she never knew. “When we found out we were having a girl, Kelly [Ciarán’s partner] mentioned Robyn, thinking it was like Robert,” says Ciarán. “Once she mentioned Robyn it got me thinking of when I was younger and when I was out on the street. If you did anything you shouldn’t, my mam would always say ‘What were you doing down there?’ I’d wonder, how the hell did she know that, and she’d say, ‘Your dad’s robin told me’.

“We always had this robin who used to show up at the back of the house. My mam always said ‘That’s your dad’s robin’, so we’d run out the back and throw him bread. So once the name Robyn came up – it had to be it.”

Appreciating his dad’s love of music, Ciarán says he’s “trying to get Robyn into music early. I sing to her, play ’70s and ’80s music to her and we always sing Rockin’ Robin to her.”

He also remembers the happy family atmosphere. “My mam and dad never argued in front of us. It’s the one thing I’d like to bring to our family.”

When parents die it “can feel like the support structure is gone”, Mary McHugh, psychotherapist at counsellingonline.ie says. “The challenges a parent might face when trying to be a parent but are grieving the loss of their own parent can differ depending on the individual person and the support structure they have around them”

McHugh recommends that grieving parents
– Get back to basics: rest, eat, be cosy
– Tend to you: be tender, not harsh
– Accept support, meals, help with childcare etc
– Communicate feelings
– Say how you feel no matter how stupid you may think you are
– Educate yourself: read other people’s stories, blogs
– Remember the family member
– Explain to your children, as children are unable to digest what is happening and can believe how you are feeling/reacting is because of them
– Allow yourself to cry with your children. They are grieving too.

Read: ‘A bystander to your own life’