What's really in your MiWadi drink? (And why's it called MiWadi?)

There’s a lot more in MiWadi than a few squashed oranges, unfortunately 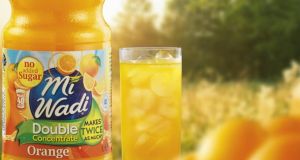 MiWadi cordial was first made in Dublin by Mineral Water Distributors, hence the name, in 1927

When I was a child, oranges seemed as exotic as pineapples and coconuts. Until a supermarket opened in the local town, fruit came from the trees or the bushes. There were plenty of blackcurrants, gooseberries and apples to give us our vitamin C so squash was nothing more than an occasional treat. A favourite was MiWadi, thanks to its funny name as much as anything.

MiWadi cordial was first made in Dublin by Mineral Water Distributors, hence the name, in 1927. Today about 16.5 million litres of MiWadi are consumed each year, though it’s hard to image the recipe is very similar to that used in the early days.

The biggest development in recent years is the many ways the company is working on using less sugar. So while you might expect that fruit cordial would be made from fruit juice concentrate, water and sugar, there is an awful lot more in these bottles.

MiWadi is owned by Britvic, a major listed British drinks maker. It is the number one supplier of still soft drinks and number two supplier of carbonates in Ireland and Britain. It employs about 500 here so it should have plenty of staff to work out what to put in its bottles. Sugar is still there, but not a popular choice so sweeteners fill the gap.

It’s really not obvious which MiWadi I might want to make my MiWadi. There is a regular option, a no-added sugar option and a “0 per cent sugar” option.

Surely I’m not the only one who is confused.

It is no surprise that the first ingredient is water. The second listed is sugar and we know there is at least 5 per cent, as ingredients are listed by weight on creating the product. But how much is that?

Well, the nutrition label shows there is 5.8g in a 250ml drink if you make it up according to the label which allows 20 servings from a one-litre bottle. So there is well over a teaspoon in each drink.

That seems reasonable considering how high sugar levels are in some other brands. So far, so good. It also has orange fruit from concentrate and orange juice from concentrate. Why not just use oranges?

It’s the rest of the ingredients that give me pause for thought. “Natural orange flavouring with other natural flavourings” is meaningless since it does not say what type of flavourings are used.

There is worse to come with aspartame and acesulfame K, both of which are about 200 times sweeter than sugar. In Europe, such sweeteners are assessed and acceptable daily intake levels are set, but we know that a lot of people are consuming far more processed food and drinks than is considered advisable. Those levels are also irrelevant to those who suffer a reaction. Aspartame, for example, is a source of phenylalanine, which can cause issues such as headaches.

The preservatives potassium sorbate and sodium metabisulphite can also cause reactions, including headaches. The words sodium metabisulphite appear in bold because it is a known allergen so a percentage of the population will have an adverse reaction, particularly those with asthma, who may experience breathing difficulties. It is often referred to simply as sulphites.

Other unappealing ingredients include the stabilisers cellulose gum and xanthan gum. These are added simply to make the manufacturer’s life easier. Cellulose gum is also known as carboxy-methylcellulose.

What’s interesting is that the list of ingredients in the “No added Sugar” version of MiWadi is not very different. There is no sugar, but the other ingredients are pretty much the same. What’s missing is the orange flavouring and the vitamins and zinc. Look at the nutrition label and you will see that there are just trace levels of sugar. So the taste comes from the artificial sweeteners.

Right next to it, you will find MiWadi with “0 per cent sugar”.

With this one, the big difference is the addition of steviol glycosides and sucralose. Both of these “natural” sweeteners that are hundreds of times sweeter than sugar. It would be far better to just buy some orange juice and add water to it.

This is not what I want from MiWadi.

‘I felt something furry move under my hand. Man alive, I am terrified of rats’
7

What can you buy for €275k in Portugal, Spain, France, Greece, and The Naul, Co Dublin?
Real news has value SUBSCRIBE