What’s really in a bar of dark chocolate?

Dark chocolate is a favourite with the health-conscious, but all bars are not the same 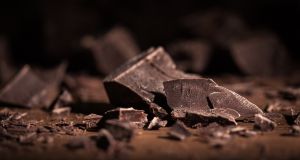 Dark chocolate has become the sweet treat of choice for the health-conscious given its reputed benefits. Photograph: iStock

The first plain chocolate I ever tasted was Cadbury’s Bournville. Dark, rich and smooth, it seemed like the height of sophistication. Even the smell was different. It had an earthiness the creamy Dairy Milk did not.

In recent years, dark chocolate has become the sweet treat of choice for the health conscious, given its reputed benefits. But all bars of dark chocolate are not the same.

So what can you learn from the wrappers?

The dark red Bournville wrapper has hardly changed over the years, though it now has much more information, a key piece being the level of cocoa solids, which is listed as 36 per cent.

Read beyond the headlines that extol the virtues of dark chocolate with its antioxidants and you will find that it really needs to have about 70 per cent cocoa to be of value and ideally 85 per cent. This is why you see numbers on the front of the packets. If you don’t see a number on the front of a bar, such as with Lindt’s Excellence Dark Touch of Sea Salt, it may have less than 50 per cent.

The Bournville ingredients are listed as: sugar, cocoa butter, cocoa mass, vegetable fats (palm, shea) and emulsifier (soya lecithin.) Sugar comes first, meaning that the recipe includes more sugar than any other single ingredient. You can see from the nutrition information that it makes up 58 per cent of the finished bar. Cocoa butter and cocoa mass, which both come from the cocoa bean, are next, but then Cadbury adds two types of less expensive vegetable fats into the mix: palm and shea.

Using palm oil in food and as biofuel is increasingly controversial. Supermarket chain Iceland has said that from the end of this year it will not stock products that contain the oil given the devastating effect on the environment in southeast Asia. There, rainforest has been cleared to make way for plantations, contributing to the destruction of the habitats of such creatures as the orangutans.

Palm oil is the most widely consumed vegetable oil on the planet, according to the World Wildlife Fund, which says it is in about half of all packaged products sold in supermarkets. Not all chocolate has palm oil, however, even the cheap brands. There is none in Aldi’s Moser Roth 75 per cent, or Lidl’s Arriba Ecuadorian 81 per cent, for example. Lindt does not use palm oil in its chocolate, though it uses sustainable palm oil to make some fillings for its sweets.

Finally the emulsifier, soya lecithin, helps to make the Bournville chocolate smoother, it extends shelf life and prevents that white cloudy fur bloom from appearing. It can also help to keep costs down, according to Palsgaard, a Danish company that makes emulsifiers and stabilisers for the food industry. Emulsifiers, such as soya, are common particularly in the cheaper bars of chocolate.

So, for example, Tesco’s own brand 85 per cent and 75 per cent chocolate, Lidl’s JD Gross and Aldi’s Fin Carre 74 per cent products use sunflower lecithins. These emulsifiers are helpful to manufacturers as cocoa is expensive and the price can fluctuate dramatically, partly because most of the beans come from four countries in West Africa.

The price has increased by 30 per cent already this year, according to Rabobank, and may go higher yet. Manufacturers know that consumers get spooked by price rises and respond better to consistency. So they give us what we want. There is nothing wrong with emulsifiers, but it is good to know why they are there.

Purists prefer bars of dark chocolate without added vegetable fats or emulsifiers and can taste the difference. That’s where such brands as the Irish Bean & Goose with its single origin Ecuador 76 per cent or the British Willie’s Cacao score. Lindt also does well. Its Excellence 85 per cent bars list ingredients as: cocoa mass, fat-reduced cocoa, cocoa butter, demerera sugar and vanilla.

This is one case where it seems that fewer the ingredients make for a more enjoyable product.

24 hours in Bundoran: ‘The town is mental. No one expected it to be so busy’
8 Tesla wants an electric Golf rival
9