What’s really in a jar of peanut butter – besides peanuts?

It’s a generally nutritious product, but why are some jars five times the price of others? 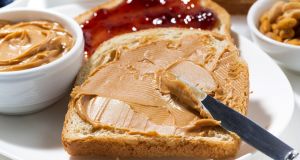 Start spreading the news: many expensive spreads contain nothing other than peanuts.

Maybe it’s because we are emotionally closer to Boston than Berlin that peanut butter goes down well in Ireland. It’s tasty, nutritious and pretty inexpensive. There’s lots of it about too and I noticed at least 10 brands in supermarkets alone, never mind the health food shops.

But what is the difference?

The price, for starters. Peanut butter comes in jars of different sizes, but some shops helpfully display the price per kilogram in teeny, tiny writing under the product or next to it on the website. Supervalu does, as does Tesco.

So even without the help of a calculator I could see that the price ranges from about €3 per kg for a jar in an own-brand supermarket range up to about €15 per kg. Why are some products five times the price of others? It seems to come down to the ingredients and marketing, but mostly ingredients.

Many expensive spreads contain nothing other than peanuts – which is a good thing. (It was so exciting to find a product that had few extraneous ingredients, I felt like doing a little dance in the aisles.) The cheaper brands include added oil, sugar or salt.

So, for example, Kelkin’s Smooth 100 per cent Peanut Butter lists its ingredient as simply “roasted whole skin peanuts”. That’s all. As mentioned on the front, it is a “source of protein” and has “no palm oil”. A 210g jar costs €2.79, which equates to €13.29 per kg. So it is one of the more expensive products.

Kelkin is an Irish health food company that also makes vitamins and minerals. The couple who set it up sold it on some years ago and it is now in the hands of Valeo Foods. But take care to pick up the right jar.

The same company makes a cheaper product: Kelkin Smooth Peanut butter with “No added sugar”. A 350g jar costs about €3, which adds up to €8.57 per kg. The marketing magic of using different jar sizes means that it would be difficult to compare prices if the shops did not display price per kg on the shelves and online. No added sugar sounds like a good idea until you check out the full list of ingredients. It has peanuts (96 per cent), vegetable oils (certified sustainable palm oil, peanut oil) and sea salt. I would classify it as “not the worst” given that the palm oil it uses is sustainable and there is no sugar.

The same cannot be said for Panda’s Crunch Peanut Butter. This is also mid-range on price at about €2.70 for a 340g jar, which works out at €8 per kg. Its ingredients are roasted peanuts (90 per cent), sugar, fully hydrogenated palm oil and salt. So there are fewer peanuts, and they are swirled up with combination of fat, sugar and salt.

Fully hydrogenated oil is created when the molecular shape of liquid palm oil is changed to make it more solid and stable. It is not classified as trans fat, of which we have been warned and which have been removed from many foods, but we don’t yet know whether there will be adverse consequences, according to the University of California.

The label says it is “American style” so it’s hardly surprising that it is not the healthiest option on the shelf. The Panda brand is owned by Boyne Valley Foods, which employs about 200 people in Drogheda, and has a stable of household names.

It also owns Lifeforce, which is one of the more expensive brands of peanut butter. A 170g jar of Lifeforce Natural Crunchy peanut butter costs €2.30, which adds up to about €13 per kg. It has just two ingredients: roasted peanuts (99.9 per cent) and antioxidant (extracts of rosemary).

So again, the same brand is appealing to different customers with different offerings. In choosing the cheaper one, you pay in other ways.

One thing all of these have in common is that peanut butter is nutritious. The costlier brands list the vitamins and minerals to be found inside, including biotin, niacin, copper, phosphorous, magnesium and zinc. It’s also a good source of protein. Though it is interesting that the Panda spread is just 20 per cent protein, while Meridian, which is made simply from nuts with the skin on, is almost 30 per cent. That is a big difference for anyone who is looking to get protein into their diet. So the good stuff is worth the extra.

I started the ‘gender reveal’ party trend, and I regret it
6