Whatever you use it for, be aware that old-fashioned salad cream by any other name may be the best 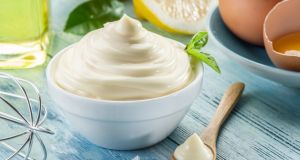 Traditionally, the ‘cream’ in salad cream is how it differs from mayonnaise. Photograph: iStock

What is salad cream for? The clue is in the name really. It’s a sauce made with cream and intended for use on salads. Traditionally, the cream is how it differs from mayonnaise.

Avid label readers will have noticed, however, that “light” mayonnaise often now includes milk in one form or other. But food giant Heinz discovered recently that few of its customers use it on salad, preferring to put it into their sandwiches. So the Heinz product may be renamed sandwich cream, which could clear the way for other brands such as Chef.

So how do the salad creams compare?

Checking out the label on the Original Heinz Salad Cream in the upside down-style plastic bottle proved surprisingly gratifying. The ingredients are listed as: water, spirit vinegar, rapeseed oil (22 per cent), sugar, cornflour, mustard powder, pasteurised egg yolk (3 per cent), salt and colour – riboflavin. This isn’t very different from popular recipes for homemade salad cream, even including some sugar.

Home cooks probably would not use water and cornflour, which help the manufacturer keep costs down. It also means Heinz can boast its salad cream has “60 per cent less fat than the standard mayonnaise market leader”. Another boast is that it has “no artificial colours, flavours or preservatives”. In this product, the colour comes from riboflavin, which is also known as vitamin B2 and is used for its yellowey, orangey colour. So it’s quite a good list.

The more food labels I read closely, the more I wonder whether I’m greedy or whether manufacturers underestimate how much we tend to eat, as portion sizes often seem small. In this case, however, the measure seems reasonable as it says there are about 28 servings in the 425g bottle. It also lists the number of calories in 15g, or about one tablespoon, as 44kcal. That’s not bad. So if you like that strangly tangy taste, it may be worth investigating.

The same cannot be said for “Heinz Salad Cream with 30 per cent less fat”. The main difference is that it has less rapeseed oil at 14 per cent, a little more egg at 4 per cent, but added sweetener in the form of acesulfame K. This can be up to 200 times sweeter than table sugar and won’t help your tastebuds to appreciate real food. It’s a habit you don’t want to get into. The calorie count is lower at 33 kcal per tablespoon, but it’s not worth it for the sake of 11 kcal.

There is little reason to opt either for “Heinz’s Salad Cream with 70 per cent less fat”, which has 70 per cent less fat than the Heinz original and about half as many calories. The list of ingredients is long and would surely appeal most to a chemistry student. It reads: water, spirit vinegar, sugar, rapeseed oil (5 per cent), pasteurised egg yolk (4 per cent), mustard, maltodextrin, modified cornflour, salt, stabiliser (guar gum, xanthan gum) preservatives (potassium sorbate and sulphur dioxide), sweetener (sucralose) and colour (riboflavin).

So there is sugar, maltodextrin and sucralose, all of which deliver sweetness to varying degrees. Sucralose, for example, is up to 650 times sweeter than sugar.

Guar gum and xanthan gum can help with consistency. Potassium sorbate is used to inhibit the growth of mould or bacteria. The other preservative, sulphur dioxide,can cause reactions in certain people, especially those with asthma. So it must be named clearly on the label and must not exceed certain levels in the product, according to the Food Safety Authority of Ireland. It is also known as E220.

Chef salad cream is no more enticing. It boasts on the front that it has “60 per cent less fat than mayonnaise”, which is true, but the list of ingredients is not inspiring. It reads: barley malt vinegar, sunflower oil (25 per cent), sugar, water, vinegar, egg yolk (4.2 per cent), salt, mustard flour, modified maize starch, stabilisers (guar gum, xanthan gum), preservatives (potassium sorbate), turmeric and antioxidant (calcium disodium EDTA).

That last one is also known as calcium disodium ethylene diamine tetra acetate, and it is used to stop the salad dressing going rancid. It bears repeating that all these ingredients have been passed for consumption. It is up to you whether you do so.

It may be time to take a fresh look at old-fashioned salad cream, even if it is called Sandwich Cream.