What's really in your tub of vanilla ice cream? 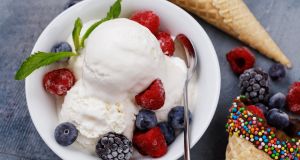 “I’m all for eating a little less ice cream, so that you can make sure to have the good stuff.” Photograph: iStock

Research is a key part of journalism. So I was shocked to discover I could not buy a tub of my favourite vanilla ice cream for the purposes of this feature. Murphy’s Ice Cream, which is made by Kieran and Sean Murphy in Co Kerry using local milk, is not churning out the popular flavour for the foreseeable future because they cannot get enough Madagascan vanilla, according to Kieran Murphy. Indonesia is the biggest producer of vanilla but the best comes from Madagascar, which is why it is so often referenced on the packaging of ice cream, desserts and yoghurts. Vanilla from the African island costs more and tastes better.

A cyclone last year, a failed harvest and increased demand for natural flavours has helped the price to soar to $600 a kilo. So Murphy’s will continue to offer a range of other flavours, just not this one.

Other companies have not followed suit, though they may yet. Marks & Spencer is still selling its Madagascan vanilla Dessert Menu ice cream. Yes, it’s calorific at 277kcal/1,153kjoules per 100g, but it’s a deliciously simply product when it comes to ingredients. It contains whole milk, clotted cream (29 per cent), sugar, dried skimmed milk, pasteurised free-range egg, vanilla extract and vanilla bean seeds.

Haagen-Dazs also gets my vote for its small list of ingredients, though it seems to be shipped in from France. It has fresh cream (39 per cent), condensed skimmed milk, sugar, egg yolk and vanilla extract.

The tub has a picture of a vanilla flower and pod. Vanilla extract is usually made by soaking the bean in alcohol and then mashing it. It’s often used for home baking. A scoop of this has about the same number of calories as the Marks & Spencer product.

There are other excellent Irish offerings worth tasting if you can find them, such as Silver Pail, Jimmy’s and Linnalla, but once you look past those, a surprising number of popular ice creams eaten here are made by Unilever.

These include Hazlebrook Farm, Ben & Jerry’s, Viennetta, Carte D’Or, Cornetto, Magnum and Breyers. So while Ireland has been awash with milk since quotas were abolished a few years ago, much of our ice cream is made in the UK or farther afield.

What this often means is plenty of hokey or cutesy advertising on the front of the packets, and an unappetising mix of ingredients on the back. Unappetising to me, at least. Hazelbrook Farm, for example, features a picture from 1898 of the old farmhouse that used to be home to the Hughes brothers in Rathfarnham and the original HB dairy. There is even a signpost with the words “Vanilla” on it, which is funny really given that vanilla does not feature in the list of ingredients. To be fair, perhaps it never did. I can’t say for sure how the Hughes brothers evoked the taste of vanilla in Ireland of yore.

The purpose of these extra ingredients is to make life easier for the manufacturer and to save them money.

Most of the other Unilever products have similarly long off-putting lists of ingredients as does the Dunnes Stores own-brand ice cream, which really goes to town with vegetable oil including palm stearin, palm oil and palm kernel oil.

So I’m all for eating a little less ice cream, so that you can make sure to have the good stuff.