Ready meals are as tasty as they are convenient, but the ingredients and calorie counts vary 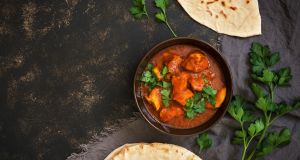 The taste of chicken tikka masala was designed to suit western palates. Hence the addition of the cream that makes it so irresistible

Since it was invented in Britain in the 1970s, chicken tikka masala has become a favourite at Indian restaurants. The jury is out as to whether it was conjured up in a kitchen in Scotland or England, but the taste was designed to suit western palates. Hence the addition of the cream that makes it so irresistible.

When you get it in a restaurant or delivered by a man on a scooter, there is no way to know exactly what goes into it aside from what is written on the menu. Get a ready meal, however, and the secrets are laid bare. So I was both thrilled and nervous on spotting Bombay Pantry’s range in a supermarket. What secrets of the Good Taste award-winning range would be written on the packet?

Bombay Pantry’s chicken tikka masala comes in bright yellow and pink packaging with a very enticing picture on the cover and the words, “Made in Ireland with love”. It promises much, including “100 per cent natural ingredients”. But does it deliver?

My fears are assuaged on reading the list. There are at least 11 spices, one of which is garam masala, which is a mix of spices, so say about 15 spices in all.

Then there are tomatoes, lemon juice, mustard, salt, rice flour, rapeseed oil and sugar. The dairy ingredients come in their whole form, so there is yoghurt, butter and cream. That’s real cream, not a cream powder mix.

Bombay Pantry’s packet does not say where the chicken is from, so I rang to ask, and was told its poultry is reared in the Netherlands.

M&S uses chicken from “the UK or the EU”, while some other brands list the source as Thailand or Brazil. Aldi’s meal is produced in the UK using Thai chicken.

The cost of Irish poultry means you are unlikely to find it in a ready meal.

The M&S product is similar in quality to Bombay Pantry’s. It uses cornflour rather than rice flour and honey rather than sugar, but other than that it is all wholesome-looking chicken, dairy, herbs and spices.

For me, a product like this comes down to taste preference and quality of ingredients.  Those two do well on both counts.

The Balti House packet has a lovely message from the owner saying it uses only the finest ingredients. It also has one of the longest, most convoluted lists of ingredients I have seen. I had to draw up a graphic – in the style of a MindMap – to get to the bottom of what it all meant. At first glance it looks like there are about 100 ingredients, though a lot of those are spices and many of them are repeated. So it’s really closer to 40 in the sauce.

The list is long also because rather than using cream or milk, for example, it uses lactose, which is the sugar in milk, and “fat-filled milk powder” which is made up of “skimmed milk solids, palm oil, sugar, vitamin D3, vitamin A and soya lecithin”.

What’s so wrong with a dollop of cream? Well, it is not as easy to work with and more expensive.

If calories matter, the product that comes out on top is the Aldi Slim Well chicken tikka masala with red peppers. A 500g pack has just 371kcal/1,567kjoules, though that is probably because it has a lot of peppers and onions. The simple list includes chicken, lots of herbs, spices and a dollop of real yoghurt and some cornstarch.

All these packs have different serving sizes. So it is probably easiest to look at calories per 100g.

My preference is to ignore the calorie count, go for the best quality and don’t have ready meals too often.