What's really in a jar of pesto sauce? 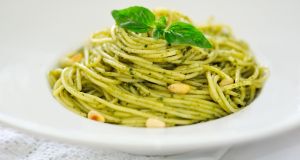 The cheat’s way to knock up a delicious dinner in minutes is to put a pot of pasta on to boil and then rustle up some pesto. In Italy, pesto can refer to a number of sauces made by pounding herbs in a pestle and mortar, but perhaps the favourite is pesto alla genovese. A basic version of this requires no more than basil, olive oil, garlic, pine nuts and Parmesan cheese.

With the ingredients to hand, it can be whizzed up at speed. But why would you when there are so many Irish and international brands available? Some even come with cheddar cheese, carrot fibres or potato flakes.

One of the first jars I examined appeared to be Italian, but turned out to be from Dublin city centre. Genovese Pesto Verde is made in Stoneybatter using extra virgin olive oil (47 per cent), pine nuts (18 per cent), fresh basil (14 per cent), vegetarian hard cheese (milk), fresh garlic and sea salt. The label is simple and there is no hard sell save for the information that the recipe uses no genetically modified ingredients, no additives, preservatives or colourings. It does advise keeping the jar in the fridge and using it by the best before date.

Simplicity adds up to a fresh taste here.

Another Irish brand with the label, “Le Skinny Chef – Irish French fusion cuisine”, has a tricolour on the front with the words “Handmade in Laois”, which it is. It says it was created by “award-winning chef Aymar Gourdet”. The Frenchman’s recipe includes basil leaves, grana padano cheese, toasted almonds, garlic, Irish rapeseed oil, salt and pepper. The fact that oil is listed as the fifth ingredient indicates there is less of it than there is in pestos where it is higher up the list. Using almonds is popular in Sicilian pesto.

Pestle + Mortar, an Irish brand that makes its products in Ballybrit industrial estate in Co Galway, is substantially cheaper than those two. Reading the ingredients gives some indication how it can do that. On the front of the packet it says, “Fresh Green Basil Pesto . . . With extra virgin olive oil, grana padano cheese and toasted pine nuts.”

So on the front it trumpets having extra virgin olive oil, but then you see from the back that there is far more rapeseed oil, with at least 18 per cent. It also has pomace oil, which is a cheaper, lower grade oil that is more acidic than extra virgin. Hence the need for acidity regulator. Notice too the cheddar cheese in addition to the grana padano hailed on the cover. This product is still a lot better than many of the cheap imports.

A Which? report earlier this year showed that some pestos in the UK replace traditional ingredients with cheaper substitutes. Sunflower oil is used instead of olive oil, grana padano instead of Parmesan and cashew nuts instead of pine nuts, which are fiddly to get out of those cones and hence cost more. That is why Filippo Berio costs less.

Sacla pesto is similar. It has sunflower seed oil, Italian basil (36 per cent), cashew nuts, grana padano PDO cheese, sea salt, glucose, pecorino romano PDO cheese, crushed pine kernels, extra virgin olive oil, flavourings, potato flakes and acidity regulator as lactic acid. (PDO means the cheese is a “protected designation of origin”, under EU rules. So the name cannot be used by just any region.) It makes use of cheaper ingredients such as cashews and potato. Then there is sugar in the form of glucose.

Pesto is not cheap to make and the costs of traditional ingredients have been rising. Even Marks and Spencer’s pesto was found by Which? to contain carrot fibres.

The lesson remains the same. Reading the label is key, though in this case Irish brands came out in front.