Eat in moderation: What’s under the skin of avocados?

Reading labels: All you need to know about ‘green gold’, from ethics to nutrition 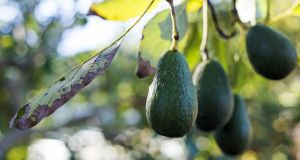 Avocados: about 46 per cent of the world’s avocados are grown in Mexico. Photograph: iStock

So what can we learn about the avocados that make it all the way to Ireland?

Avocado pears come in their own home-grown knobby dark green packaging, but this has not stopped producers and retailers from wrapping them in plastic. That plastic cannot be recycled here, but it does contain valuable information, primarily on origin, variety and nutrition. (Where there is no plastic wrapping, check out the box.)

About 46 per cent of the world’s avocados are grown in Mexico, where business is booming, and they are to be found regularly on Irish supermarket shelves. There is a lot of controversy around the industry in Mexico as organised crime gangs have muscled in on the profits from the “green gold”. Some farmers have also been accused of clearing forests to grow the crop.

Of course, not all avocados are Mexican. When shopping, the ones I found in Dublin were from Kenya, Zimbabwe, South Africa, Peru and Israel.

Next, you will see from the packet what variety you are getting. Popular ones for sale in Ireland include Hass, Fuerte and Bacon, which was developed in the US. Hass are often the creamiest and the most likely to be ripe.

Some packets also have the EU organic mark – a green square with a leaf made from stars, even though the produce is from outside the European Union. That’s because nonprepackaged organic food imported does not have to be from the EU to use the EU logo. Hence a packet of Fuerte avocados from Kenya did. It also had a circular symbol saying “Soil Association Organic”. The Soil Association is an independent British certification body that carries out inspections and awards organic certification to farms and businesses that meet its standards. It licenses almost 70 per cent of organic food on sale in the UK.

This is one time when there is no need to spend the extra money buying organic, according to the American Chemical Society, a nonprofit organisation that promotes scientific understanding, as the thick skin helps to prevent the flesh underneath from absorbing pesticides.

Avocados are very nutritious and, a few years ago, the society released a video showing how to get the most benefit from the fruit. It advised peeling them, as most of the goodness is just under the skin. Some plastic packaging sold here has illustrations showing four steps to get the flesh out. It all seems like a bit of a faff, though, and less efficient than using a spoon.

Avocados are also known as butter fruit, and you can see why from the nutrition label, which shows that they have about 19.5g of fat per 100g. The good news is that just 4.1g of that is saturated fat, but that is still regarded as undesirable. They also have plenty of monounsaturated fats, which can help to lower the amount of bad cholesterol in your blood and reduce your chances of heart disease and stroke, according to the Irish Heart Foundation. They also provide fibre, with about 3g per 100g, and protein. So it’s pretty comprehensive.

The fruit has nearly 20 vitamins and minerals, according to the California Growers Association, including vitamins E, K and C, and minerals such as potassium.

Moderation is key, however, as most packaging on Hass avocados indicates that about half of one, or 90g, equates to a serving. That then adds up to about 178kcal or 732kj, with the “lighter” Fuerte just two calories lower.

So, to put it in context, half an avocado has the same number of calories as about two chocolate biscuits – but much more nutritional value.