Beer for all: ‘No beards, tats or check shirts required’

Next weekend’s Brewtonic festival is all about the fun side of beer, and everyone is welcome 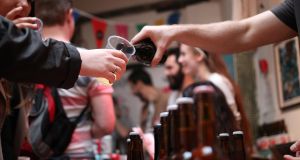 Irish breweries Kinnegar, Rascals, Hopfully, Brewtonic and others will be pouring at Brewtonic Beer Festival

Next weekend’s Brewtonic Beer Festival is aiming to attract all types of beer fans – with “no beards, tats or checked shirts required”. Taking place over three days at the Bernard Shaw Pub and the Eatyard street market in Dublin, it’s all about the fun side of beer, with a Beer Pong Championship, a Blindfold Beer Challenge and beer and food pairings with Kinara, Box Burger, Goode Life and lots more.

Irish breweries Kinnegar, Rascals, Hopfully, Brewtonic and others will be pouring at the festival and there are plenty of beer-themed discussions lined up, including a beer and cheese event hosted by Susan Boyle of 2 Sisters Brewing.

A Sours Speciality Bar will pour more than 14 different sour beers over the weekend, and if you’re curious about this style, head along to Phil Tavey’s “Go Suck a Lemon” introductory talk on sour beers. The festival will also host the third Social Hops Project harvest party, an initiative for growers around the country to contribute home-grown hops to a wet-hop ale. It’s free in to the festival, but buying a ticket in advance for €10 guarantees you entry and comes with €10 Eatyard vouchers and a complimentary drink.

In the meantime it’s worth checking out Covert Operation, a special one-off collaboration between Wexford’s YellowBelly and Molloy’s Liquor Store. Brewed to celebrate Molloys’ 85th anniversary, this 5 per cent pale ale has a little haze, a restrained fresh and hoppy aroma with plenty of juicy pineapple and orange flavour – it’s a tasty drop.

Kildare’s Rye River Brewery, founded in 2013, won 19 awards at the recent World Beer Awards where more than 2,000 beers from 30 countries were adjudicated. Their Crafty Brewing Company Irish Lager won the best classic style Pilsner. This 5 per cent, straw-coloured lager has a frothy head and that classic, sweet graininess and a smooth finish.