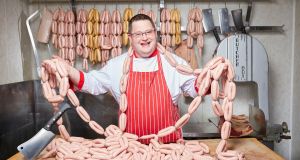 Barry John Crowe from Cavan who holds the record for the most sausages made in a minute in the lastest Guinness World Records. Photograph: PA

It was a case of bangers and smashed for a modest Cavan butcher who has secured his place in the latest edition of the Guinness World Records book after breaking the speed sausage record by a massive margin.

Barry John Crowe, who runs a butcher shop in Cavan Town, was able to produce 78 sausages in 60 seconds in April 2017, breaking a record held by an English butcher who could only manage a mere 60 sausages in that time.

When asked for the secret to making a quick sausage he played down his achievement. “Ah lookit, I have been making sausages since I was eight and I’m nearly 38 now so that’s a lot of time making them,” he said.

“It’s a bit of trial and error along the way and the longer you are doing it the better and the faster you get,” he continued.

He only decided to go for the record after being persuaded by a producer on RTÉ’s Big Week on the Farm which was broadcast last April. “I said sure why not. There was all sorts of rules and regulations and there was an official from the book watching everything,” he told The Irish Times.

One of the rules states that the sausages have to be the same size which was a challenge for Crowe but not an insurmountable one. “You can’t have one big one and one small one,” he said. “So there’s a lot of concentration. When I started I said to myself ‘just keep going, just keep going, don’t stop, don’t stop.’ I was delighted then to see how much I had broken the record by.”

He sells 36 different flavors of sausage and has just launched a spice bag flavored banger. He has three different flavours including chocolate chip and honeycomb going into Lidl shops in a couple of weeks. You have been warned.