What’s really in a pack of cream crackers?

One brand of crackers may look like the other, so look closer to see the difference 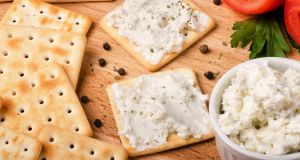 Crackers, anyone? These flat biscuits are unusual in that the ingredients are identical across some brands

A slow feeling of dread creeps over me these days as I go to examine the packets of old favourites from my childhood. What secrets lie hidden in plain sight?

What strange and unlikely ingredients will be found on the list?

Sometimes, though, I find a product that does not seem to have changed much from the old days. That was the case with cream crackers. The savoury biscuit squares with the rounded corners were invented in 1885 in Ireland and made at the Jacob’s factory. The Tallaght factory was closed in 2008, but the name carries on, thanks to international giant Valeo Foods.

Over the years, the packaging and ingredients have changed little. There is a fairly simple list of ingredients so long as you stick to the originals. They have flour (wheat flour, calcium, iron, niacin, thiamin), vegetable oil (palm), salt, raising agent (sodium bicarbonate) and yeast. Sodium bicarbonate is another name for baking soda, a common household product to be found in baking powder along with cream of tartar. There is little to see here save for the palm oil, which is used because it is cheap even though the environmental cost is high. Change the oil and the original cream cracker would be a winner.

Jacob’s cleverly reminds us that its crackers are a “source of fibre”. To make that claim, there must be at least 3g of fibre per 100g or at least 1.5g of fibre per 100 calories. With the classic brand, thanks to the wheat there is 3.8g of fibre in each 100g. To put that in context, some salad leaves have just about 1g per 100g. The black pepper crackers here have 3.6g.

Cream crackers are unusual in that the ingredients are identical across some brands. So Jacob’s classic cream crackers appear to have the exact same ingredients as Supervalu’s, Carr’s, Lidl’s Rivercote and Aldi’s Savour Bakes even down to the unsustainable palm oil.

That does not hold true for Aldi’s Devon brand. In addition to the usual ingredients, these crackers also have E320, E321, and barley malt extract.

E320 is also known as butylated hydroxyanisole and E321 is butylated hydroxytoluene. They are there to stop the product going rancid, though it’s a mystery why they are not needed in the other brands. Interestingly, these crackers have just 3g of fibre per 100g and therefore are not considered a source of fibre. So, if you are in Aldi pick the Savour Bakes rather than the Devon.

There are also gluten- and lactose-free crackers from Schar, which specialises in food for those with special dietary needs. These crackers also have lots of fibre with 5.8g per 100g, but that comes with a dizzying list of more than 20 ingredients and a hefty price tag. These cost about €4 per packet.

It takes a lot to make these taste like the real thing. So the long list of ingredients includes unsustainable palm oil, unidentified flavouring, unidentified natural flavouring and soya protein. There is also sugar as glucose syrup and maltodextrin.

Products like these are the reason that dieticians warn against avoiding gluten unless you are gluten-intolerant, coeliac or lactose-intolerant. They are a blessing for those who need them but a waste for those who do not.

Many brands don’t say where their crackers are made, but it’s worth checking out the name of the company on the back of the packet anyway.

You might be in for a surprise. Devon brand crackers were made in Malta by Consolidated Biscuit Company, for example.

Even more surprising is that Jacob’s comes in two guises: Irish and British. The British brand is owned by United Biscuits and its crackers just don’t taste the same, though the packet says they are the “original and best”.