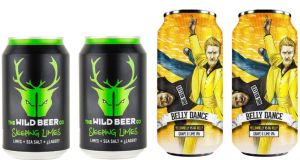 Adding a dash of lime cordial to your pint was a thing for a while – in the UCD student bar, anyway – sometime in the late 1990s or early noughties. It was one of the few ways, back then, to add a bit of flavour to your beer. Or if you were a bit more grown-up, and had the extra cash, you could always order a bottle with a wedge of lime stuffed into the neck. (Though someone always loved to ruin the effect by citing the theory about lime being used to keep the flies away from beer in hot countries; so kind of unnecessary on a chilly evening in Dublin.)

A number of lime-inspired beers have hit the shelves over the past while, from Ireland and further afield. The Wild Beer Co, based in Somerset, has released Sleeping Limes, a lime and sea-salt lager, although the reference to lager comes with a question mark, so the style is open to interpretation, I guess.

It tastes pretty much like a lager to me, however, with that sweet grainy aroma, a hint of lime, and it’s crisp and light-bodied. Overall the lime is quite subtle, giving the beer a refreshing and slightly sweet flavour profile with a touch of sea salt. At 4.6 per cent it’s very drinkable but it won’t rock your world.

Belly Dance is a grape and lime IPA, a collaboration between YellowBelly, from Wexford, and Big Belly Brewing, from the Netherlands. Inspired by the pisco sour lime cocktail, the brewers added grape and lime juice after fermentation to maximise flavour. You could be forgiven for mistaking this beer for a sour – it’s all about the lime, with any hop aroma or grape flavour taking a back seat. It tastes less than its 6.9 per cent and will most definitely wake up your taste buds.

What’s happening with our seaweed and why should we care?
Real news has value SUBSCRIBE