How did the ugly monkfish become a Celtic Tiger delicacy?

Curried monkfish took nation by storm in the 1990s, leading to a brief abandonment of cod 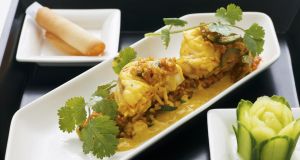 Monkfish is undoubtedly one of the ugliest fish on the planet. It forms part of the angler family, of which the one we all know (lophius piscatorus) is probably the most attractive. Attractively ugly that is. Monkfish have a voracious appetite and usually hide in the sand, luring their prey in with the little tendril that hangs in front of their face. They can grow up to 4ft long and can weigh up to 50kg.

A fisherman once told me that they used to never land them in Ireland because they thought they were an incarnation of the devil. Indeed, the Germans call them “sea devils”, so it wasn’t just us Irish that were superstitious to the point of starvation.

So how did this extremely ugly fish become a Celtic Tiger delicacy that now is at the point of being over-fished in certain parts of the world? Given that each female monkfish lays a million eggs throughout the year, we must seriously be eating a lot of them in the world to drive them to near extinction.

Monkfish and curry pair well. Was it this fact that brought their attention to Irish waters? You may think we’re not a nation of curry lovers, but we’ve been enjoying curry in Ireland since at least the late 18th century, when returning Irish soldiers of the British empire resettled in the west of Ireland and brought home their little bags of spices.

In researching my Irish food cook book, I came across mentions of potato curry in Westport around 1850, though there was no mention of monkish. It wasn’t until the 1990s that curried monkfish took the nation by storm. For a brief moment we seemed to abandon our predilection for cod and salmon and switch instead to monkfish and sea bass.

To make a monkfish curry: prepare a curry base (onions, garlic, spices, curry paste, fish stock and cream) and simmer it for 20 minutes. Cut your monkfish into chunks and add into the curry at the last minute. Poach the fish for two minutes and finish with lashings of sheep’s yogurt and freshly chopped coriander.

Róisín Ingle: Deck the feckin’ halls. That is an order
7

‘Moving to a foreign land is daunting, but he took it in his stride.’ The Dublin woman walking for her dad
8