Why the world needs Iris Murdoch’s philosophy of ‘unselfing’ 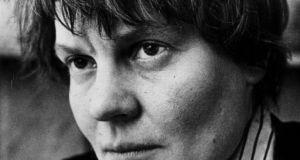 Iris Murdoch: ‘It’s been easy to dismiss Murdoch as a philosopher because she was such a brilliant novelist.’ Photograph: Getty

Iris Murdoch was born on Blessington Street, Dublin, on July 15th, 1919. While she left Ireland at a young age, this did not “remove the country from her imaginative or emotional frame of reference”, wrote Thomas Duddy in A History of Irish Thought.

Indeed, some of her novels feature an Irish backdrop, and it has been suggested that her ability to see events such as the 1916 Rising from both Irish and British perspectives informed her philosophical understanding of truth.

Murdoch, who died in 1999, bequeathed a moral theory that was rooted in the idea of being attentive: holding “a just and loving gaze directed upon an individual reality”. This “just vision” required what she called “unselfing”, a hugely challenging task but arguably exactly what’s needed today to counter the rise of nationalism and tribal politics.

To mark the centenary of her birth, a number of events are planned, including the issuing of a commemorative stamp by An Post on her birthday, and an accompanying Philosophy by Postcard initiative, which will allow members of the public to “ask Iris Murdoch” any question they like (see panel). The latter is the brainchild of Clare Mac Cumhaill and Rachael Wiseman, two academics who have been researching Murdoch’s contribution to philosophy and her collaboration with three other notable thinkers – Elizabeth Anscombe, Philippa Foot and Mary Midgley – at the University of Oxford during the second World War.

What was Iris Murdoch’s most important contribution to philosophy?

CMcC: Different philosophers have different views on this, but I think her most important contribution is her re-imagining of the Platonic notion of “the Good”, a concept she thinks we need in the secular age.

For existentialist writers like Sartre, the loss of God means that each individual must create their own values, with only their conscience to guide them. Murdoch thinks this is a false picture, both psychologically and metaphysically. Her view is that we can retain much of the conceptual structure that makes the concept of God intelligible by replacing the Judaeo-Christian idea of a person, God, with the concept of the Good.

RW: Yes, the idea of Good is what allows us to think systematically about the moral virtues, but it is not only a tool for thought. She thinks that the Good is something whose reality is manifest to us in our everyday encounters, in concrete cases of moral virtue – for instance, in acts of courage, honesty and kindness.

Can you explain her idea of unselfing?

RW: In one way, Murdoch’s idea is very straightforward. To unself I simply turn my attention outward, away from myself and on to the world. If I do this successfully I will see things as they really are, and not through the lens of my own selfish concerns.

I say it is straightforward but of course this idea is very difficult – both practically and philosophically. Our view of the world is always clouded by our own desires and concerns –Murdoch often speaks of the “fat relentless ego”.

CMcC: She does think, however, that experience of nature has a special role to play in making manifest to us the quality of consciousness that unselfing involves.

She gives a wonderful example of looking out the window while in an anxious state of mind – “brooding perhaps on some damage done to my prestige” – when she spots a hovering kestrel. At once everything changes, a bit like a Gestalt shift. The hurt vanity disappears – one is unselfed – and the full presence of the kestrel is revealed.

A famous passage from her novel The Bell states: ‘Love is the extremely difficult realisation that something other than oneself is real. Love, and so art and morals, is the discovery of reality.’ Is this a fair summary of her thinking about truth?

CMcC: I think, yes, that’s a good way to picture it. Like Plato, she assumes that goodness is a matter of truth-seeking, which is a way of bringing oneself into contact with reality. This requires patient attention to what is there, which again demands unselfing. You can see how she might think that the artist displays such attention - she thinks realism in art is a moral achievement.

RW: She was very much opposed to the conception of truth espoused by logical positivist philosophers like AJ Ayer, who thought that the only meaningful sentences were those that could be verified.

But Murdoch doesn’t think that truth is a matter of a statement lining up, or corresponding, with the facts. Rather, ways of being that are true – as, for instance, when you love someone – have reality as their object.

Why has Murdoch’s work been relatively overlooked in philosophy departments?

RW: One reason is that professional philosophy is highly specialised – philosophers will say “I’m a metaphysician” or “I’m an ethicist” or “I’m an epistemologist”. And this is the way the subject is taught in universities - as little discrete units. But Murdoch doesn’t think that way, so to get to grips with Murdoch’s ideas, you have to be ready to think across all the whole terrain of philosophy, and academic philosophy doesn’t encourage this sort of big-picture thinking.

CMcC: I also think it’s been easy to dismiss Murdoch as a philosopher because she was such a brilliant novelist. Being a novelist and a woman makes her look very different from our cliched idea of a philosopher – we could understand this as a case of fantasy clouding just vision.

If you had one question you could ask Iris Murdoch what would it be?

RW: Murdoch taught herself to really see people and to describe them. So, I’d ask her to describe a scene for me, one involving her and the other three women we’re working on. Perhaps tea in Lyon’s tea room, or a dinner in Somerville college. I’d love her to describe these women who were her friends, and through that description, of course, we’d learn about them but also about her.

CMcC: And I’d ask her what she makes of the interconnectedness of everything in the digital age. The internet seems to at once both expand and limit our capacity to see reality justly, something we haven’t adequately got to grips with. I wonder what she’d recommend, by postcard of course.

Under #PhilosophybyPostcard, to be launched in July, members of the public will be invited to “send a postcard to Iris Murdoch” asking any question they wish – the deeper the better.

In Murdoch’s stead, 100 philosophers have been recruited to supply answers, which will be sent back by postcard to entrants, with all correspondence published online.

One of postcard designs to be used for the #slowphilosophy project was selected on Wednesday at the Irish Young Philosopher Awards at UCD. The illustration by Amelia O’Donnell (11), a fifth class pupil at Scoil Phadraic Cailini National School in Donabate, north Dublin, riffed off the theme of sight and perception. If anyone could see through Murdoch’s lenses, Amelia said, “then perhaps they may have her clear moral vision of what is truly good in our world”.

Cafes, schools, bookshops and other premises are encouraged to host a pop-up postbox for the event. https://www.philosophybypostcard.com/.

* The research project by Mac Cumhaill and Wiseman into Murdoch and her three Oxford contemporaries is one of 15 projects being exhibited at the 2019 British Academy Summer Showcase, a free festival of ideas taking place in London, June 21st-22nd. https://www.thebritishacademy.ac.uk/events/summershowcase/2019