Is technology to blame for spread of ‘unjoined-up thinking’?

Social media ‘invites us to be so many people at once’, says UCC academic Fiachra Long 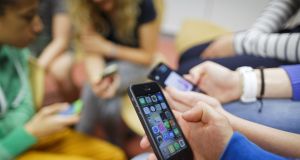 ‘There is something new in our day – the way we can express invented identities without the requirement to stand by them.’ Photograph: Photothek/Getty Images

Cappuccino-sipping, Irish Times-reading liberals like to think they’re above the sort of mental foibles of Donald Trump and the Brexit bunch. But dodgy logic is not the preserve of the so-called right.

“Unjoined-up thinking” has become “symptomatic of our times”, says Fiachra Long, head of UCC’s School of Education. It can be found in the notion that we can tackle climate change while doing nothing to change the way we consume. Or in the idea that one can affect political change while dismissing politicians as “all the same”.

Trump and the Brexiteers display thinking that is “deliberately not joined-up”, says Long but there is another, more common form of the malady which Long believes is fuelled by social media. Online platforms allow people to adopt contradictory identities, he says, thereby normalising inconsistency.

As The Irish Times weekly philosophy column moves to a new home in Thursday’s Arts and Ideas pages, Long suggests you should take a good look at how joined up your own thinking is before passing judgement on others.

Brexit means Brexit. What could be more joined up than that?

Fiachra Long: “Joined-up thinking would suggest that the more one veers towards independence, the less one can maintain interdependence.

“It is like Donald Trump pretending to be a president for all Americans while siding with Republicans against Democrats. Somehow the thinking is deliberately not joined-up.”

What of the rest of us? You say we’ve become ‘so tolerant of unjoined-up thinking that we are happy to follow what does not make sense’. Why so?

“Studied reflection shows that we cannot start to think seriously about anything if we reject the law of contradiction.

Brexiters. Please choose one of these statements. Both cannot be true.

“The People’s Vote is an attempt to stop Brexit”

“Brexit is the will of the people”

“Hannah Arendt hazarded the view that totalitarianism is the aspiration to be everyone in the person of the dictator, so that the dictator is our very being writ large. To move in this direction is to cancel out finally the difficult differences so necessary to accept in a complex democratic society.

“Perhaps this trend is exacerbated by a technology which invites us online to be so many people at once, to adopt so many personalities as if they are ourselves.

But can people be expected to avoid contradiction entirely? Adopting multiple identities and challenging traditional binaries is surely part of being human.

“A distinction might be made between the formal theory of contradiction and informal practical situations where elements act at cross purposes and are seemingly contradictory.

“One has to be careful when applauding multiple identities in the same person. Just as schizophrenia is not a desirable end state for any psyche so it is equally not desirable to develop Jekyl and Hyde tendencies in our emotional lives. There has to be a limit to whatever multiplicities we allow to develop in ourselves without the risk of going crazy.”

Is this really such a recent affliction? Surely unjoined-up thinking can be found in every generation.

“Of course we all fall victim to unjoined-up thinking and unjoined-up practices in our lives. We know we need to go on a diet but can’t quite manage to do so.

“There is, however, something new in our day – the way we can express invented identities without the requirement to stand by them. It is all too easy to run rather than to listen due to the way online communication is structured. People can now live in their heads more extensively than before.

“This used to be mainly confined to adolescence when we spent time imagining our futures, our future partners, our future jobs because we needed to respond eventually to available opportunities. Social media technology offers the chance to extend this imaginary life into adulthood.

“We can experiment with further images of ourselves. So while adulthood might once have been experienced as a relief from the multiple identities we once imagine for ourselves, it might also represent an unwanted limitation and a contradiction of our apparent freedom.

“The moral challenge, however, is to lead one life not many.”

Question: Should politicians ever break promises?

Robert Lynd replies: “We should honour the wobbler and the turncoat above all others… They are men who are not afraid of their own past, and are glad to feel that what they say in 1936 is different from the nonsense they talked in 1913.”