Calamity Jane star had thought her 93rd birthday was imminent but birth cert reveals she was born in 1922, not 1924 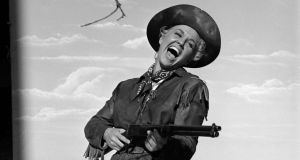 Movie star Doris Day turns 95 on Monday – which has come as a bit of a birthday surprise to the Hollywood star as she had believed she was about to turn 93.

The actress and singer known for films including Calamity Jane, Pillow Talk and Move Over Darling had believed she was born in 1924. However, a copy of Day’s birth certificate obtained from Ohio’s Office of Vital Statistics by Associated Press shows that Doris Mary Kappelhoff (the star’s original name) was born on April 3rd, 1922.

“I’ve always said that age is just a number and I have never paid much attention to birthdays, but it’s great to finally know how old I really am!” Day said in a statement.

Her spokesman Charley Cullen Walters said: “There has long been speculation and rumours about Doris’s age and we get this question a lot, looks like we finally have the answer.

“The story I have heard the most is that at one point Doris was up for a role when quite young and her age may have been miswritten on the audition form.

“We don’t know if that’s correct, but if so it could’ve simply stuck for all these years.”

He said Day and actress and friend Betty White, who was born in January 1922, had long joked about White being two years older.

“Now we know that they are actually just a couple months apart, and turns out it’s an even bigger exciting landmark than we thought,” Walters said.

Day, who started out as a big-band singer, made her film debut in 1948 with Romance on the High Seas, before starring in a string of smash-hit 1950s and 1960s romantic comedies. She remained a pop star as well, with hits including Whatever Will Be Will Be (Qué Sera) and Secret Love.

Pillow Talk earned her an Oscar nomination and she won critical acclaim for dramatic turns in Midnight Lace and Love Me or Leave Me, but Oscar gold, including the lifetime achievement award, has eluded her. – (PA, agencies)

Sex and the Irish: we were always a law unto ourselves
Real news has value SUBSCRIBE