Doris Day (91) lured out of retirement by Eastwood - report

Eastwood persuaded his Californian neighbour Day to do a film, says ‘Bild’ tabloid 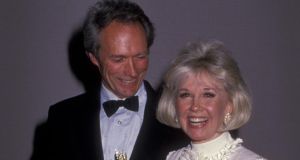 Clint Eastwood and Doris Day at the Golden Globe Awards in 1989: They are neighbours in Carmel Valley and Eastwood reportedly gave Day a script which she loved and is set to have her first film role in almost half a century. Photograph: Ron Galella, Ltd/WireImage

Did you hear what happened when Dirty Harry met Calamity Jane? Movie history, that’s what.

The two stars are neighbours in Carmel Valley, California, and on a recent visit Eastwood reportedly presented Day with a script.

Citing unnamed sources, Germany’s Bild tabloid says Day was delighted with the role and is working out the final details of her first film role in almost half a century.

Day began her career as a singer in 1945 but shot to worldwide fame in the 1950s as the star of musicals such as Love Me or Leave Me, the Hitchcock thriller The Man Who Knew Too Much and a series of comedies with Rock Hudson, James Garner and Rod Taylor.

Since retiring from singing and acting, mostly playing variations on the same wholesome blond character, Day has lived out of the spotlight and dedicated herself to her animal welfare charity, the Doris Day Animal Foundation.

A fear of flying meant she has refused both an honorary Oscar and the Kennedy Center Honors. She also declined to pick up a lifetime achievement Grammy in 2008. But if anyone can convince her to return to the screen it may be Eastwood, who presented her with a Golden Globe in 1989, her last listed public appearance.

According to reports, Day has agreed to the project on two conditions: that it is filmed around Carmel, and that a cut of the profits goes to her animal fund.

That the Doris Day audience is still out there was clear in 2011 when a “new” album of unreleased material stormed the British charts, making her the oldest-ever artist to have a top-10 album.

Whether she’s ready, willing and able for a final spin on the movie merry-go-round is another question. Whatever will be, will be. But, perhaps, perhaps, perhaps she’s decided her last film should be a sentimental journey under Clint Eastwood’s direction instead of her current final movie credit from 1968: With Six You Get Eggroll.

On Day’s own website there’s no mention of the film project. But perhaps there’s a secret message hidden in the musical choice that greets visitors: “I wanna have another go-around . . . ”