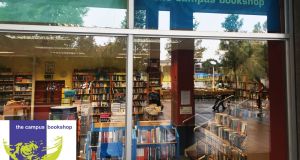 The connection between the Campus Bookshop at UCD and the Fred Hanna bookshop family is to end, after 41 years as academic bookseller at the university. The current licence to operate the shop expires at the end of May. In March, College Bookstores Ltd, trading as The Campus Bookshop, served three months’ notice to the university.

The bookshop licence is going to tender and it is understood UCD expects to have a campus bookshop in place for the beginning of semester one, in late August. The university didn’t rule out a short gap without a bookshop on campus over the summer.

The Campus Bookshop, owned by Judi Hanna, is on the concourse of the James Joyce Library building and sells a variety of books including prescribed textbooks and offers a special order service.

Bookseller Fred Hanna operated from his family’s flagship store, one of the oldest and best-known bookshops in the city, on Nassau Street opposite Trinity College Dublin for 47 years. Hanna died in 2011, aged 77; in 1999 he had sold the business (including the name Hanna) to Eason’s, but retained the Campus Bookshop at University College Dublin in Belfield. His daughter Judi has owned the UCD shop for many years, running it along with erstwhile manager Philip Harvey – the moustached manager was familiar to many former students and staff – and current manager Colm Kinsella.

Kieran Hone, who works with IT and is finance director for the campus bookshop, said today that “within existing structures it was not viable to continue” at the university, because of a “lack of clarity with the tendering process and the length of licence offered”. The licence ended in April 2018, but legally it continues until a new licence is agreed or one party terminates it. The bookshop gave three months’ notice on March 1st. The notice expires at the end of May, but it has offered to stay on while tendering takes place.

The company will go into voluntary liquidation when the handover to the new bookshop company is complete, Hone said. “We hope to have continuity,” he said. “We have special deals for students and loyalty to them.” Four people work fulltime at the shop, with several students working part-time there, bringing the number up to eight or 10 during term-time. Asked if people would lose their jobs, he said he hoped some might be retained by the new operators because of their knowledge base, but “I’m an old fossil and it doesn’t matter”.

The shop used to operate on five-year licences, Hone said, but over the past eight or nine years this has reduced to three-, two-, and then one-year terms, which “makes it difficult to plan or invest,” he said. “Hopefully they’ll learn their lesson and [the next licence] will be a better timespan.” The company used to deal with UCD’s legal and commercial departments on the licence, and now also deals with the procurement department.

The company is sad to leave. “We don’t want to do it,” he said. There is good business in the university bookshop, he agreed, although in August 2017 contracts for book purchases by the library were centralised (“under procurement rules”), and that area of the business was lost, which affected the bookshop’s ability to bulk buy, and offer better prices to students, he said.

UCD said today that “under the terms of the licence and service agreement with the campus bookshop operator, over the past 10 years the operator was offered multiple extensions, culminating recently in an extension of one year.

“Following notice received from the current operator of their intention to cease operations in the campus bookshop in May 2019, bringing the contract to an end, the university will put the operation of the campus bookshop out to public tender for a period of four years and 11 months, the standard time period.”

The news broke on social media with Claire Nolan of UCD Administrators announcing: “We are very sad to learn that the Campus Bookshop in UCD will be closing at the end of this month. It has been a fixture on campus for over forty years, and its presence as a place to browse, and discover, will be very much missed.”

“A campus without a bookshop ... dreadful,” commented Dr Mary McAuliffe. Dr Emily MarkFitzGerald, associate professor of art history/cultural policy at UCD, tweeted: “I’d like more info on why this is happening? Will it be replaced? If I’m being honest, I rarely frequented it – few events, no used books, and didn’t find previous management v helpful – I much prefer my indie local @ravenbooks. But obviously a space with massive potential.”

Liam Heneghan (“immigrant professor”) recalled “Pretty much the foundation of my intellectual life was picking up random titles there. This still on the shelf beside me in Chicago. (George Woodcock’s “Anarchism”). Purchased 1989 or so.”

Deputy president at DCU Daire Keogh commented: “It’s a combination of changes in retail and impact of digital resources. Sad to see commercial challenges closing campus bookshops, but, significantly, university libraries are busier than ever and many are now open 24/7.”

Dr Niamh NicGhabhann tweeted “ V sad to hear – it is a great bookshop”.

“V sad to hear – it is a great bookshop; Horrified to read this”.

“Why? All of us are wondering how UCD can come up with the funds for so many projects (some of which are useless), but not to keep the bookshop open.”

“where are law students supposed to get deals on the prices of already extravagantly priced textbooks now???? man this sucks.”

“Why? How on earth has it come to pass that a university the size of UCD will have no bookshop? Not like there is another one near it! Dreadful news.”

“What?!? I loved that place. They’d order the most obscure books for you – great old “Fred Hannas” vibe in it. Am really sad to hear it’s going to close. A campus the size of UCD without a bookshop. Terrible.”

There were also suggestions that an Oxfam book store would be “an ideal solution”.