Can a novel also be a work of philosophy? 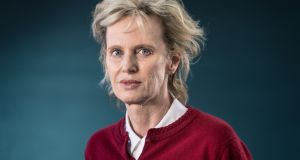 There are philosophers who have written novels, and novelists who imbue their work with philosophical ideas. Iris Murdoch and Albert Camus might be seen as examples of the former; Siri Hustvedt and Michael Frayn the latter, although the lines are blurred.

It’s a hard trick to pull off, either way. Formal logic doesn’t make for a gripping read, and introducing “big ideas” into a thriller can seem forced and clunky.

That, however, did not deter Matthew McKeever, a Trinity College Dublin graduate who completed his debut novella around the same time he was writing up his PhD on formal semantics (incorporating the philosophy of language and metaphysics). “It’s very interesting to move from academic philosophy to fiction writing,” he says. “The latter uses more of your brain, I find, while the former uses less but, what it uses, it uses intensely.”

Currently editor of the philosophy journal Inquiry, McKeever splits his time between his native Co Down; Austin, Texas and continental Europe. His novella, however, Coming From Nothing, is situated around his Dublin alma matter and centres on the story of a young couple in crisis – not unlike the oeuvre of fellow Trinners grad Sally Rooney (though with a lot more references to Immanuel Kant’s theory of Ding-an-sich).

McKeever, this week’s Unthinkable guest, acknowledges the challenge of mixing ideas with narrative but he suggests the novel is a particularly well-equipped form for philosophising today given the “weirdness” of our rapidly evolving relationship with technology.

Your novella examines the way in which the internet and social media allow us to have multiple identities. Is it possible to live authentically while regularly using Twitter and Facebook?

Matthew McKeever: “Not sure. I think it’s going to take a lot of work before we can really think about these sorts of questions because, although it’s so familiar, living a life on social media is also so weird.

“I think it’s good not to lose track of the weirdness – that we habitually talk to hundreds of people, often mostly strangers, who will reward us with a heart if we say something good or criticise us if we say something bad. That’s a new way of being, something that would have been pretty much incomprehensible even 50 years ago.

“And you might think it’s bad for authenticity: that it forces us to censor ourselves and tailor what we say, or incentivises us to kiss the ass of more popular people so that the popular people like us and then some of the people who like the popular people will like us also, again resulting in more of those highly coveted hearts. I’m not sure.

“One could argue, on the other hand, that taking these things into consideration makes one a more reflective speaker and thus thinker, and that in general being put into conversation with a great variety of people gives one a broader and truer perspective on life, and that helps live authentically. It probably depends – as in most things – on what you make of it.”

In your story, good intentions result in a harmful act under the anonymity of the web. Why did you focus on this theme?

“Sometimes that’s good; I know people with chronic medical conditions for whom the internet provides a needed social outlet. But often it’s bad. . . In the book, I concentrated on the bad aspects - how you can hide behind anonymity and easily fit in with the bad people.

“It’s kind of an obvious but easily overlooked point: for most of human history, if you wanted to be really unpleasant, to insult and discomfort someone, you had to bear some costs: to be known as an unpleasant person. Now any of us can easily abuse anyone else just by making a new avatar and saying mean things.

“That’s a weird feature of our life today that I don’t think we’ve quite appreciated the novelty of, and that I wanted to consider in my book.”

Dare I say, there’s a similarity between your characters and those created by Sally Rooney in her novels – well-meaning but somewhat directionless. Is it unfair to suggest this is a particular type produced by Trinity College Dublin?

“Ha! Yeah it must be something in the water around College Green. I think perhaps if there’s a sense of directionless or ineffectualness to both mine and Rooney’s characters it could be a result of the generation we’re portraying – millennials, let’s say, around 30, which roughly splits mine and Rooney’s age.

“If you think of that generation as people who came of age during the 2008 financial crisis it could well be that there’s a sense of powerlessness against big societal forces, of it feeling like there is little one can do.

“By contrast, younger people – say, those who came of age last year – seem much more action-oriented: think of Greta Thunberg or the activism of the survivors of the Parkland shooting [in Florida].

“So I’m tempted to say it’s not a Trinity thing, specifically, but a reflection of the particular generation we’re trying to capture.”

You’re in good company with the likes of Iris Murdoch and Jean-Paul Sartre as a philosopher-novelist. Which has to compromise more – the ideas or the narrative – when writing in this form?

“My great hope would be neither, and that the goal of the philosophical novella should be to show that ideas are alive and motivating features of people’s lives. I always think of the famous Keynes quote about how those who think of themselves as people of action are actually in fact ‘slaves of some defunct economist’ – that ideas move us even if we don’t think they do.

“My aim in the book was to try and illustrate this point, the hope being that actually narratives – of people’s lives – can’t be told without presenting the ideas behind them.

“Of course, that’s easier said than done. A challenge made of a lot of ‘novels of ideas’ is that they do in fact compromise narrative for ideas, and when editing the book it was definitely something I tried to correct for. Whether successfully or not is for the reader to decide.”

Coming From Nothing: A Thought Experiment Novella by Matthew McKeever is published by Zero Books

Question: Can you be a great thinker while also holding down a relationship?

Friedrich Nietzsche replies: “Heraclitus, Plato, Descartes, Spinoza, Leibniz, Kant, Schopenhauer – they were not married, and further, one cannot imagine them as married. A married philosopher belongs to comedy, that is my rule.”