From Troubles Belfast to his back garden, David Crone finds riches in his environment 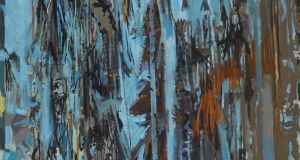 Treecurtin by David Crone. Courtesy of the artist

What is it?
An oil painting.

How was it done?
Crone’s work exists, without any apparent conflict, somewhere between abstraction and representation. Usually, one can discern recognisable detail – here, the verticals and angularity of, presumably, tree trunks and branches. But the composition does not present us with a scene, per se. We can intuit it, as we intuit the spillage of light through the network of vegetation. As a painter, Crone has affinities with several precursors, including Walter Sickert, Pierre Bonnard and perhaps Georges Braque (who had similar preferences in terms of his colour palette).

Where can I see it?
Treecurtin features in this year’s RHA 189th Annual Exhibition at the RHA Gallagher Gallery, Ely Place, Dublin, May 21st-August 10th (rhagallery.ie). The exhibition combines works selected from open submission, with pieces by academicians and invited artists and is a central event in the art calendar. Submitted works are judged by a panel of academicians, a procedure that arouses much interest and speculation, to put it mildly, but generally occurs behind closed doors.

This year, however, filmmakers Hilary Fennell and Mark McLoughlin are making a documentary tracing the progress of six artists throughout the country as they prepare work – filming began back in January – and trust it to the tender mercies of the selection panel. The film includes the deliberations of the panel and the installation of the exhibition. The odds are tough: on average about 300 works are accepted from a submission of more than 2,500, and for the six brave artistic participants in the documentary, the stakes are high. The film will be screened on RTÉ1 television in June.

Is it a typical work by the artist?
It is typical. Crone was born in 1937 and grew up in the Lisburn Road area of Belfast. Following art college he went on to teach at second and then third level. The city was his subject because that was where he was, day in and day out. But from the end of the 1960s he was based slightly outside the city and then, in the mid-1990s, he moved a little farther, to a much more rural setting in Co Down. From that point, his substantial garden and the borrowed landscape beyond it have provided his major sources of subject matter.

During his urban years, Crone became a painter of the intrinsic fragmentation of city life, relishing the visual mazes formed by shop window displays, the jumble of interior and exterior spaces, abrupt reflections and sudden prospects, people veering in all directions, building sites and demolitions. All of which were accentuated during the Troubles, with added anxiety.

The sources in his garden paintings may differ – the rhythms and intersections of growth and decay, light and shade, day and night, weather and seasons – but he approaches them in the same pictorial way, reflecting the multiplicity of complex, interwoven processes and changes. He is generally and rightly regarded as one of the finest Irish painters of his time.