Doris Day: Her image was too shiny. Her films were too perky. Yet she was a sort of genius 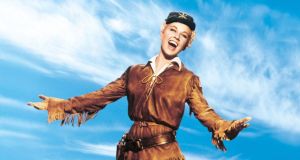 Doris Day: the late star as Calamity Jane, in the 1953 film

It seems odd to describe one of Hollywood’s most successful actors as underappreciated. But Doris Day, who has died at the age of 97, never accrued the critical respect that came the way of contemporaneous stars such as Judy Garland or Shirley MacLaine. Her image was too shiny. Her films were too perky. The words “girl next door” were mentioned. Big, serious commentators yearned for a little more grit in their entertainment.

Yet she was a sort of genius. She forged a career in the postwar years with movies such as I’ll See You in My Dreams, from 1951, and Calamity Jane, from 1953. By 1956, Alfred Hitchcock, who made a habit of hiring the biggest female stars of the era, confirmed her status by casting her opposite James Stewart in The Man Who Knew Too Much.

Throughout the 1950s she was among the world’s most successful recording stars. Hits such as Secret Love and Que Sera, Sera (Whatever Will Be, Will Be) remain unavoidable today. As the 1960s loomed, Day teamed up with Rock Hudson, a lifelong pal, for a series of brilliant sex comedies that have lost none of their sheen. Pillow Talk, from 1959, can, in particular, bear reasonable comparison with the exactly contemporaneous Some Like It Hot.

Financial and personal troubles followed. She revived her career on television. But for almost half a century the biggest star of the Kennedy era was only intermittently visible to the general public. Garbo was scarcely more available in her later years.

Day was born Doris Mary Ann Kappelhoff in Cincinnati, Ohio, on April 3rd, 1922. (She claimed to be two years younger, and it was not until 2017 that her true age was confirmed.) In the prewar years, as a precocious teenager, she became part of a dance troupe, but a car crash damaged her leg and edged her towards the record business. She took singing lessons and, now as Doris Day, ended up working with bandleaders such as Bob Crosby and Les Brown.

“Watch it, hey, I’m Doris Day, I was not brought up that way,” the bad girls sang ironically in Grease. It’s true that, when she moved into films, Day did play more than a few plucky virgins. The title character of the delightful Calamity Jane, for all her buckskin, is not exactly a roustabout. With her platinum hair and perfect, turned-up nose, Day was the ideal star for that corner of 1950s America that believed itself to have perfected the art of suburban bourgeois living.

The comedies she made in the late 1950s and early 1960s – James Garner and Cary Grant did the costarring when Hudson was elsewhere – were something else entirely: ironic, cheeky, mildly satirical. The influence of Pillow Talk, in which she and Hudson share a party line, on the much later Mad Men is unmistakable. Yes, Day plays a prissy character who looks down her nose at the more sexually promiscuous Hudson. But she is a talented, unforgiving working woman who takes no nonsense from any male colleague or client.

By 1968 the changes in American society could not be ignored, and, after releasing With Six You Get Eggroll, Day, still in her mid-40s, retired from movies. But she was denied a life away from the camera. The same year Martin Melcher, her third husband, died, and Day discovered that he and his business partner had rendered her bankrupt. She also learned that, against her knowledge, he had signed her up for a TV show. Day, like most of her generation of movie stars, was suspicious of the new medium, but the success of The Doris Day Show, which ran for five years, helped her escape financial ruin and facilitated another crack at retirement.

There were many further complications in her life. The wrangling over her late husband’s financial disasters went on for decades. Terry Melcher, her son, a record producer who worked with The Beach Boys, attempted to sign Charles Manson and was once resident in the house where the cult leader’s followers murdered Sharon Tate and four others. Melcher died in 2004.

A lifelong Republican, who came out to support the older George Bush’s campaign, Day devoted much of the second half of her life to animal welfare. In the early 1970s, long before fur became unfashionable, she campaigned with friends such as Mary Tyler Moore and Angie Dickinson against its use in the fashion industry. She founded the Doris Day Pet Foundation – now the Doris Day Animal Foundation – in 1978 and the Doris Day Animal League in 1987.

In the mid-1980s she returned to host a TV chatshow and welcomed Hudson, recently diagnosed with Aids, as one of her guests. That appearance did much to publicise a condition that was still being ignored by too much of the American establishment.

Day is not quite the last of a golden age. Kirk Douglas, her costar in Young Man with a Horn, and Olivia de Havilland are still with us at 102. But one more link with Hollywood in its pomp is severed. She never received even an honorary Oscar. It is correct to describe her as undervalued.