Who hasn’t pushed their family to the mental limits with one visit? 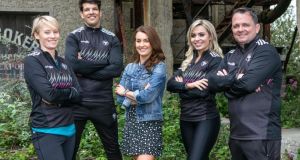 Ireland’s Fittest Family (RTÉ1, Sunday) begins with 15 families of exactly four members each striding confidently into the future as though animated by the spirit of de Valera himself.

They are all straight-backed and lithe and none of them ever seems to need a nice sit down or breathes heavily when left in a hot car or placed near a window. No, they have unified purpose and speak in unison when introducing themselves, like twins in a horror film or the Fine Gael frontbench or my wife and I.

“Éire!” I say and put my hand on my heart, when I see them marching towards me. But to be honest with you, I find Ireland’s Fittest Family and the premise behind it a little difficult to relate to.

I’d be much more inclined to watch a show that was called A Nice a Sit Down or maybe Cake Party or just Ireland’s Sleepiest Journalist. Presenter Mairead Ronan promises us drama but I’m not convinced.

“Over eight weeks these families are going to push each other physically and mentally to their limits,” she says, but I don’t know. Eight weeks? This is Ireland.

Who among us can’t push their family to their mental limits with one afternoon visit or a passive aggressive phone call? Seriously, I do it at least once a week.

Aiding Mairead in this pursuit of drama are four shadowy figures all dressed in New Jersey gangster outfits like Tony Soprano sometimes wears. Okay, I’ve just been told by The Irish Times sports department that these are called “track suits” and this foursome are famous sports people. In fact, they represent all four of the sports.

Davy Fitzgerald manages a team who play the patriotic one in which large men clash over a mysterious orb (Celtic Boogie Woogie, I believe it’s called).

Donncha O’Callaghan commonly engages in that sport in which well-to-do men wrestle over a pigs bladder (this is called Big Man Mud Party or maybe The Stock Market or possibly Who’s for Violent Hugs?).

Last but not least is Derval O’Rourke who does running for no good reason (in the Olympics this is called “Running for No Reason”). Seriously, she’s not being chased by a bigger child or trying to get to the off-licence before 10 – these are the two reasons I have run in the past. She’s just running, for the laugh, like. It’s crazy. She really loves running.

Now, Mairead is not wearing a “track suit”. She is wearing a dress and we never see her running. Indeed, I have it on good authority that she is carried from location to location by tuxedo-clad crewmen much like Madonna is carried from step to step in the video for Material Girl. She is only delighted to be welcoming another batch of healthy outlanders to the capital for this year’s demonstration of national fitness.

Here are the things the families have to do in the first episode:

Five families are made to race rafts from the outlands to a safe zone from which Mairead and her indentured sportsfolk observe them coldly.

Five more families play a game where each family member must clamber up some scaffolding to collect multicoloured balls, after which they must run with this object attached to their belts. It’s an impractical way to transport balls.

Five more families must run, collect barrels, then run with the barrels to another area where they must use each of the barrels as stepping stones to get to a finish line, leaping from barrel to barrel before hoisting the backmost barrel to the front of the queue and starting again. It’s quite complicated.

The last families over the line in each game must avoid elimination by clambering through tiny claustrophobic tunnels, climbing atop high metal scaffolds and ascending a greased incline, much like happens to Peig in the book Peig.

Like Peig, they’re all pretty stoical about this. Nobody lies down on the ground crying, “This is too haaaaaard”, like I do at work. Everyone co-operates with each other and encourages each other. Even when they shout they do so kindly.

People occasionally perform mini-motivational speeches to the camera but they never mention the cash prize because their motivations are pure. Nobody says, “You sure can buy an awful lot of pies for €15,000!” which I’m pretty confident is what I’d say, as I transformed the first vowel in “Fittest” into something else.

By the end of the show, these happy, healthy family groups are divvied up among the four coaches to be pitted against one another in sublimated combat for the rest of the series. It’s hard for the rest of us not to stare ruefully at our own dour, slumped, television-watching clans. How would these louts perform in Ireland’s fittest families?

I’m not sure. I can tell you that no-one in this episode turns to their aging parent and says “I’m tired, carry me” and Mairead has never had to narrate the words, “And there’s 71-year-old Mr Freyne, climbing the scaffolding with his weeping middle-aged son on his back”.

Nor does she say, “The family are having difficulty with this task as they haven’t communicated since a divisive game of Monopoly last Christmas” or “And now Patrick has stopped running in order to argue with his brother over the contents of their (still living) parents’ will.”

But I ask you, aren’t these the things that really say “family” to this nation? Sometimes watching the emotionally and physically healthy citizens of Ireland’s Fittest Family, it feels like a century’s worth of miserable family-themed novels were written in vain.

Elsewhere people understand the true meaning of the word “family”.

On Spencer, Vogue and Wedding 2 (Channel 4, Monday) Irish presenter/model Vogue Williams and her consort Spencer from Made in Chelsea plan a televised version of their wedding in between such typical family pursuits as starting a terrible podcast, hiring a pet psychic, launching a brand of non-alcoholic gin and caring for The Pigliwig.

The latter is what they call the child who lives with them (possibly their actual child, but I don’t want to presume). It feels like as good a name as any now that we’ve all gone mad on the naming issue.

Anyway, this heightened reality gawpfest is pleasantly inconsequential and insincere but it’s tinged with a strange melancholy. Vogue is the nearest thing we have to indigenous, reality TV royalty in this country and having her abscond to Britain at this, a time of great need, feels like one blow too many.

So once they’re selected, the President should dispatch Ireland’s Fittest Family to get her back (that’s a programme I would definitely watch).